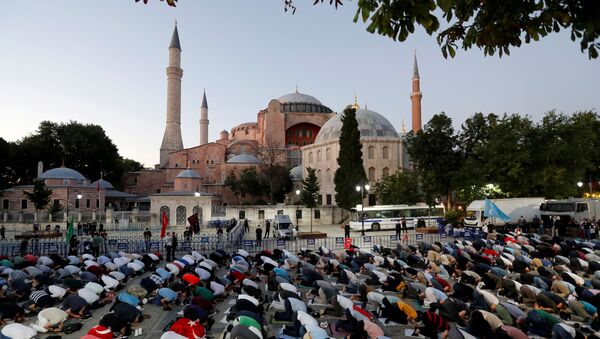 "The ruling by the Turkish Council of State to overturn one of modern Turkey's landmark decisions and President Erdogan‘s decision to place the monument under the management of the Religious Affairs Presidency, is regrettable", Borrell said in a statement.

"France expresses regret over the decision of the Turkish Council of State on changing the status of the Hagia Sophia cathedral museum as well as the decree of President Erdogan on transferring it under the control of the Directorate of Religious Affairs", Le Drian said in a statement.

The French foreign minister stressed that Ankara's move posed a threat to Hagia Sophia as one of the most significant symbols of the secular nature of the Turkish state.

"Hagia Sophia must continue to represent the plurality and diversity of religious heritage, dialogue and tolerance", Le Drian added.

Earlier in the day, Turkey's highest administrative court annulled the 1934 decree converting Hagia Sophia into a museum, meaning it can now be used as a mosque. Turkish President Recep Tayyip Erdogan has already signed the necessary decree.

Hagia Sophia was founded by Byzantine Emperor Justinian as a cathedral and was opened on 27 December 537. The church, considered the epitome of Byzantine architecture, was the world's largest building for over a thousand years. After the capture of Constantinople by the Ottomans and the fall of the Byzantine Empire in 1453, the cathedral was converted into a mosque, but since 1934, the building, by a decree of the founder of the Republic of Turkey, Kemal Ataturk, became a museum and was included in the UNESCO World Heritage List in 1985.