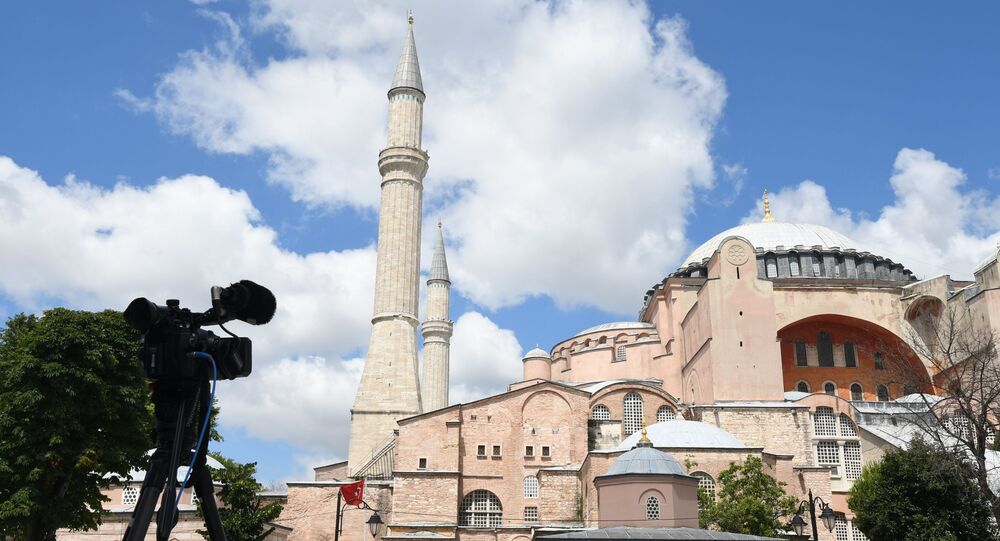 Last year, Turkish President Recep Tayyip Erdogan suggested that Hagia Sophia, formerly the Church of the Holy Wisdom, which used to be an Orthodox Christian cathedral before becoming a mosque and then a museum, could become a mosque again, with free admission.

Turkish President Recep Tayyip Erdogan confirmed on Friday that he has signed a decree converting Hagia Sophia into a mosque.

"It has been decided to delegate control over Hagia Sophia to Diyanet [Directorate of Religious Affairs] and open it for prayers," the decree that Erdogan posted on Twitter read.

Erdogan's decree has been read off in the Grand National Assembly of Turkey and met with applause.

​Earlier in the day, ​Turkey's highest administrative court, the Council of State, annulled the 1934 decree converting Hagia Sophia into a museum. While the decision has been taken unanimously, it can be appealed within 30 days.

The State Council has confirmed the fund that owns Hagia Sophia has decided to hand over the building for public use as a mosque at no cost.

The first Muslim prayers in Istanbul's Hagia Sopia are expected to be performed on July 24, and admission to the mosque will be free for everyone, Turkish President Recep Tayyip Erdogan has stated.

Ankara has repeatedly stressed that it considers the status of Hagia Sophia, located in Istanbul, its domestic affair and opposes any foreign interference in the decision.

Turkey's has been opposed by UNESCO, the EU, the US and Christians around the world, with Ecumenical Patriarch Bartholomew warning that the move "would turn them against Islam".

The Church of the Holy Wisdom was completed in 537 AD during the reign of Byzantine Emperor Justinian the Great, and remained the main cathedral of the Orthodox Church until the conquest of Constantinople by the crusaders in 1204, after which the building was briefly turned into a Catholic cathedral.

© REUTERS / Murad Sezer
Moscow Considers Status of Hagia Sophia Turkey's Internal Affair
In 1261, the Byzantines recaptured the city and the Church of the Holy Wisdom once again became the main Orthodox cathedral.

Nearly two centuries later, in 1453, the city was conquered by the Ottoman Empire and turned into a mosque. It remained a mosque until 1931 when it was closed to the public for four years. It was re-opened in 1935 as a museum by the Republic of Turkey.