US Police Reform: Is There Hope for Democratic-Republican Consensus? 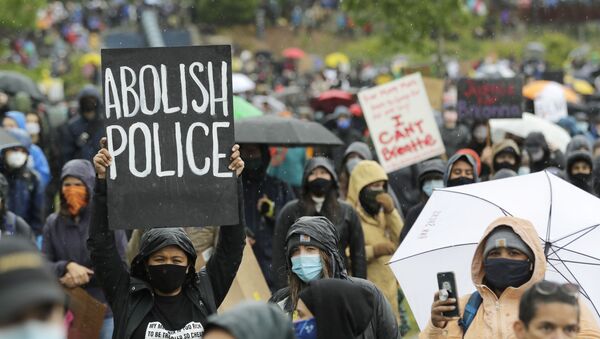 Oleg Burunov
All materialsWrite to the author
In mid-June, President Donald Trump announced the signing of an executive order that will oversee the introduction of a police reform bill, a move that came a few weeks after the death of African-American man George Floyd at the hands of a white policeman in Minneapolis.

With more than 90 percent of Americans reportedly supporting police reform in the country, Democrats and Republicans remain at loggerheads over the issue amid the ongoing George Floyd protests. Here’s a deeper insight into the problem.

In late June, the George Floyd Justice in Policing Act, proposed by US Democrats, obtained enough votes to pass in the House of Representatives.

The Democrats' bill would ban the use of chokeholds and no-knock warrants, mandate body cameras, restrict the use of lethal force, and set up independent structures to investigate allegations of police brutality while also establishing a national database for identifying all officers recorded as having used excessive force.

In addition, the document stipulates toughening measures against police for violence against suspects, as well as allocating hefty sums for conducting independent investigations related to cases of abuse regarding federal supervisory authorities. 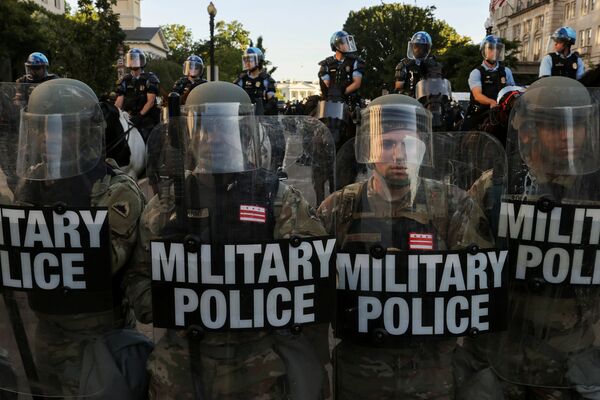 The problem, though, is that for the bill to be signed into law by the US president, it needs to get a majority of votes in the Senate, which, unlike the House of Representatives, is controlled by the Republicans.

Senate Majority Leader Mitch McConnell has already made it clear that the Republicans will not vote for the package of measures proposed by the Democrats, noting that their project was "going nowhere" in the upper house.

"It's basically typical Democratic overreach to try to control everything in Washington. We have no interest in that”, he added.

The Democratic Party’s document followed the Republican majority in the Senate unveiling a police reform bill to address the concerns of the African-American and other communities, who have been protesting for weeks against police brutality and racism.

"We believe that our policy positions are ones that bring communities of colour into a position of stronger understanding and confidence in the institutions of authority", Senator Tim Scott, an African-American man who authored the Justice Act, told reporters in mid-June.

He added that the bill would hopefully bring “our law-enforcement community to a place where they have the resources necessary to de-escalate some of these situations and […] to hire more officers, and have more training, and have a better perspective on history”.

Biden Does Not Support Idea of Defunding Police, Campaign Says
The Justice Act envisages strengthening police training methods and tactics, particularly concerning the issues of de-escalation of force and the duty to intervene, as well as to take concrete steps to end the practice of chokeholds. The bill seeks to provide police with more body cameras and ensure that police departments use them and store the resulting data properly.

The measure will also require full reporting after each incident in which officers discharge their weapons, use force, or enforce no-knock warrants. The Justice Act will make lynching - an extrajudicial, vigilante-style execution - a federal crime.

Democrat Kamala Harris, who helped author the Democrats' bill, immediately slammed the GOP version of police reform as something that she said "gives lip service to the problem".

"There's not teeth in it. Literally what he [Scott] is proposing would not save a life”, she asserted. Kamala was echoed by Democratic Senate Minority Leader Chuck Schumer, who said that the GOP document does "not meet the moment”.

"This bill will need dramatic improvements. This is not about the perfect being the enemy of the good. It's about replacing what's ineffective with the effective”, he pointed out.

Currently, the chance of a consensus between the sides remains unlikely given that the police reform bill introduced by the Republicans in the Senate has already failed to pass a crucial vote due to strong opposition from the Democrats.

The bill fell short of the 60 votes needed, as the Democrats argued that the proposed law doesn't go far enough in dealing with and preventing police brutality and negligence towards people’s lives.

"If you don't think we're right, make it better, don't walk away", Tim Scott said as he condemned the Democrats' opposition.

Chuck Schumer, for his part, said that the Democrats rejecting the Republicans’ bill would open up a path to resolving the issue in coordination, not competition, with the GOP.

Trump Calls on Police to 'Get Tough' Amid Raging Protests Over George Floyd's Death
The Democrats insist that Scott's project will not help eradicate systemic racism and police brutality, while the Republicans believe that it was necessary for the Democrats to vote for the document in order to begin a discussion, something that could make it possible to make precise amendments to it.

Norman J. Ornstein, a congressional expert at the American Enterprise Institute, was, in turn, cited by the website Press of Atlantic City as arguing that “the way McConnell set up the process almost guaranteed this outcome”.

“If he had wanted bipartisan legislation, he could have gotten it either by turning the issue over to the Judiciary Committee (which includes members of both parties) or by forming a bipartisan group. He did neither”, Ornstein noted.

Political scientist Frances E. Lee from Princeton University, however, pointed the finger at the Democrats, adding, ”it’s clear that Democrats believe that they would be better off preserving the issue for the [November presidential] election; a negotiated outcome would force Democrats to accept far less than what they want […] [and] muddle the clarity of the party’s election message”.

Both parties’ bills came after US President Donald Trump announced the signing of an executive order that will oversee the introduction of a police reform bill earlier in June. The document seeks to prevent a repeat of events like George Floyd’s killing and to address the mounting criticism against the perceived excessive use of force by some US police departments.

The measures include a much-requested ban on the use of chokeholds by police unless an officer's life is in danger. Also, efforts will be made to develop new advanced and less lethal weapons for police to prevent fatal "interactions", according to the document.

Importantly, POTUS’ proposed police reform turns a blind eye to the key demand of Black Lives Matter protesters to "defund" the police, which is notably omitted in the bills proposed by the Democrats and the Republicans.