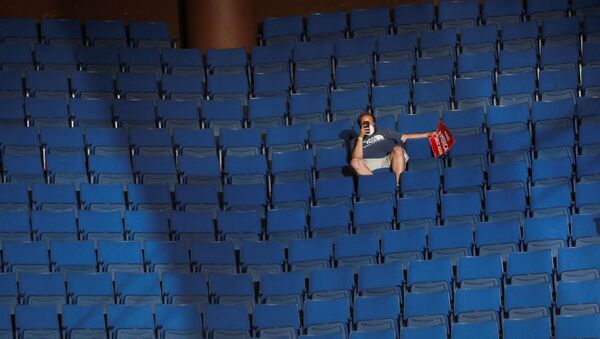 According to Donald Trump and his re-election campaign manager Brad Parscale, the president’s campaign rally in Tulsa should have been attended by nearly a million of people, who had signed up for the event. However, the occasion has actually seen significantly fewer Trump’s supporters than initially expected.

“Radical protesters, fuelled by a week of apocalyptic media coverage” prevented Donald Trump adherents from entering his campaign rally in Oklahoma Center in Tulsa on Saturday, the president’s campaign manager Brad Parscale announced on Twitter. Only several thousand people attended the event despite a claimed record number of tickets sold: nearly a million. Many now believe that young TikTok users and K-pop fans should be blamed for this discrepancy between RSVPs and actual attendance.

According to political strategist Steve Schmidt, who has worked on a number of Republican campaigns, including the one for George W. Bush, myriads of teens across America reserved tickets for the rally with no actual plans of attending the event.

“This is what happened tonight. I’m dead serious when I say this. The teens of America have struck a savage blow against @realDonaldTrump”, Schmidt wrote on Twitter, tagging along the account of Lincoln Project, a campaign dedicated to preventing the reelection of Donald Trump.

Schmidt said that his 16-year-old daughter and her friends were among those who took part in the stunt, while re-posting Parscale’s tweet from 14 June claiming that about 800,000 tickets have already been sold for the Saturday event.

My 16 year old daughter and her friends in Park City Utah have hundreds of tickets. You have been rolled by America’s teens. @realDonaldTrump you have been failed by your team. You have been deserted by your faithful. No one likes to root for the losing team. @ProjectLincoln https://t.co/VM5elZ57Qp

US Representative for New York Alexandria Ocasio-Cortez also later wrote on Twitter that it was TikTok teens who “flooded the Trump campaign” with fake ticket reservations and “tricked” the campaign into believing that the event would be attended by a million of people.

“KPop allies, we see and appreciate your contributions in the fight for justice too,” Ocasio-Cortez argued.

Shout out to Zoomers. Y’all make me so proud. ☺️ https://t.co/jGrp5bSZ9T

A number of videos, photos and posts featuring young TikTok users dancing in front of screenshots for registration for Trump’s rally flooded social media platforms over the last couple of days. They are believed to have joined forces with K-pop fans to sign up for the event, even creating fake email addresses and phone numbers from time to time to reserve as many tickets as possible. However, they did not have the slightest desire to actually use them.

My daughters created fake email addresses and phone numbers and made reservations as part of the TikTok effort. So funny.

the kids are alright pic.twitter.com/sDPp7pqmFY

U.S. Representative AOC praises K-pop stans and TikTokers for sabotaging Trump's Tulsa rally by RSVPing thousands of seats only to leave them empty:

“we see and appreciate your contribution in the fight for justice” pic.twitter.com/WQgesxj0EU

Donald Trump’s rally in Tulsa saw only a couple thousand attendees, despite organisers’ concerns that the president’s supporters would not be able to fit in the 19,000-seat BOK Center. They even built an outside stage for the president’s address to accommodate an unprecedented turnout, which apparently went unused.

The outdoor stage for @realDonaldTrump’s Rally in Tulsa being built.

This will be the 1st time that POTUS speaks to BOTH crowds in person - inside & outside.

If you come to the rally and don’t get into the BOK Center before it’s full, you can still see the President in person! pic.twitter.com/7hoLFgzvLA

The Saturday event, which had been postponed one day so as not to coincide with Juneteenth holiday, has been criticised by many of Trump’s Democratic opponents, including former presidential candidate Hillary Clinton, who slammed the president for gathering large crowds of people in the middle of a global pandemic.