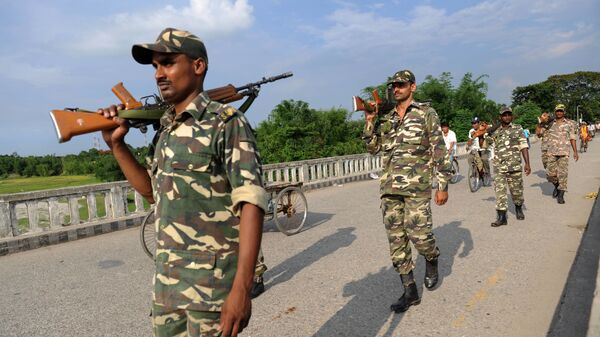 © AFP 2022 / DIPTENDU DUTTA
Subscribe
New Delhi (Sputnik): New Delhi and Kathmandu have been engaged in a tussle since May, when India launched a strategic road along the Lipulekh Pas leading to China border. Nepal had accused India of encroaching on its territory.

In a snub to India, the lower house of Nepal’s Parliament, the House of Representatives, has passed the New Nepal Map (Coat of Arms) Constitutional Amendments, which include the strategically important Indian territories of Kalapani, Lipulekh and Limpiyadhura as part of Nepal. The Bill also seeks to resemble the national emblem.

The constitutional amendment was introduced by Law Minister Shivamaya Tumbahamphe on 31 May following a massive backlash from the opposition and citizens after India inaugurated the road along the Lipulekh Pass.

The bill will be incorporated in the Constitution only after the upper house, the National Assembly, passes it and if there are no amendments moved against the bill's provisions in 72 hours by the lawmakers. After being passed in the upper house, president will authenticate to make it part of the Constitution.
Meanwhile, India has maintained Kalapani region to be the part of Indian territory and denounced Kathamandu’s claims as lies.

India’s External Affairs Ministry said on Thursday: “We have already made our position clear on these issues. India deeply values its civilisation, culture and friendly relations with Nepal.”

On deteriorated relations  in India, Prime Minister K.P. Sharma Oli said: “We will seek a solution through diplomatic talks on the basis of historical facts and pieces of evidence. And that means our territory should be returned.”

In November 2019, India had showed Kalapani as its territory, resulting in concerns from Nepal but the matter escalated when on 8 May when Defence Minister Rajnath Singh inaugurated an 80-km road along the Lipulekh Pass, which goes up to the India-China border.

Nepal has stated that the Kali River is the border between the two countries, but India refuted this claim.