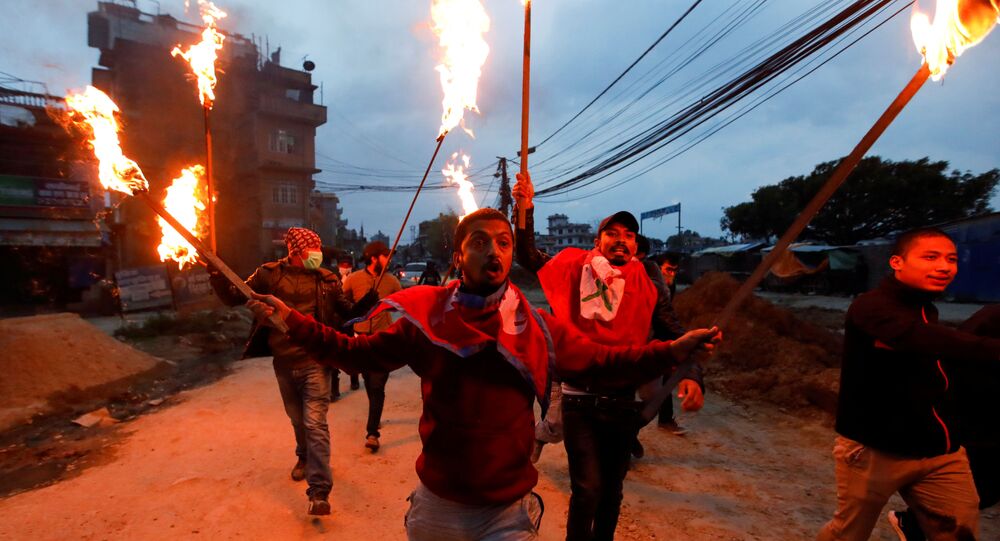 New Delhi (Sputnik): A border dispute erupted between India and Nepal on 8 May after Indian defence minister Rajnath Singh inaugurated a strategic route connecting to the China border along the Lipulek Pass.

The border issue between India and Nepal has turned serious and New Delhi is monitoring the situation, government sources said on Wednesday.

"We are carefully following developments in Nepal. Border issues are sensitive by nature and require trust and confidence to be resolved to mutual satisfaction,” the official said.

Following widespread protests and agitation over India’s inauguration of a new road leading to the Chinese border in early May, Nepal released a new political map on Sunday showing the Indian territories of Kalapani, Limpiyadhura and Lipulekh in Nepal’s Sudurpaschim province.

However, on Wednesday, a constitutional amendment moved by Prime Minister KP Sharma Oli to alter Nepal’s map was formally put on hold as he wasn’t able to build consensus in the Parliament to proceed.

India has taken note of the political developments in Nepal's Parliament. “It underlines the seriousness of this issue. It also demonstrates the value being attached to relations between Nepal and India. We continue to monitor the situation,” the source added.

Soon after India inaugurated the strategic 80km road along the 17,060-foot high Lipulekh Pass at the tri-junction of India, China and Nepal, Kathmandu summoned an Indian diplomat and asked India to refrain from encroachment.

Nepal Prime Minister Oli had accused India of occupying his territory and breaching the territorial integrity of Nepal. On May 21, Nepal issued the new map incorporating Kalapani and Lipulekh. India quickly reacted to the move and urged Nepal to respect its sovereignty.