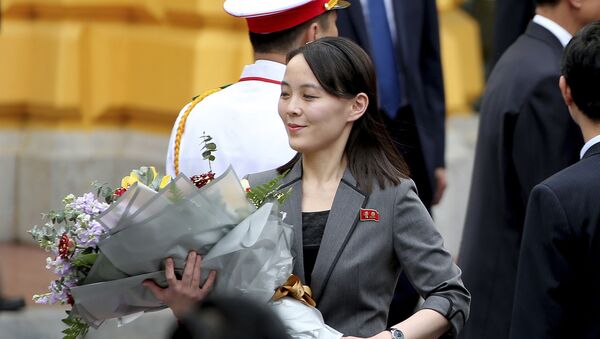 © AP Photo / Loung Thai Linh
Subscribe
Kim Yo-jong was thrown into the media spotlight two months ago after Kim Jong-un’s long absence in the public prompted rumours that he was gravely ill and had even died or that he had been deposed in a coup, with his sister Ms Kim, who is believed to be next in line to run the country, assuming power.

Kim Jong-un’s sister, Kim Yo-jong, is now allegedly in charge of inter-Korean matters, reported The Chosun Ilbo, South Korea’s leading newspaper, citing sources within the country's government. According to the newspaper, Kim Jong-un has personally assigned his sister to a role that was previously performed by a committee of North Korea’s governing party in order to modernise the government.

One indication that the woman, said to be in her mid-thirties, is now in control of Pyongyang’s relations with its southern neighbour is the fact that a spokesperson for the United Front Department, a commission tasked with relations with South Korea, recently "parroted" a warning she made earlier, wrote The Chosun Ilbo.

The warning in question was Kim Yo-jong’s remark about South Korean activists sending propaganda leaflets across the border to North Korea with the help of balloons. Ms Kim threatened to close the Inter-Korean Liaison Office that functions as a de-facto embassy in the absence of diplomatic relations and a communication channel between the two states, if authorities Seoul fails to stop activists from sending leaflets into the DPRK.

An anonymous government source told The Chosun Ilbo that Kim Yo-jong’s statements are being treated as "a directive from the leader". The newspaper stressed that more and more North Korean agencies are quoting Kim Yo-jong’s remarks on South Korea.

According to The Chosun Ilbo, Kim Jong-un’s sister has assumed the role of a bad cop in relations with South Korea. The newspaper cites as an example when the North Korean leader sent a letter of condolence to South Korean President Moon Jae-in only a day after his sister Kim Yo-jong heavily criticised Seoul.

Kim Yo-jong was thrown into the media spotlight two months ago after Kim Jong-un’s weeks-long absence from the public eye. After he failed to appear at the celebrations of the birth anniversary of his grandfather Kim Il-sung, the most important holiday in North Korea, media started speculating that he was gravely ill and had even died or that he had been deposed in a coup, with Ms Kim, who is believed to be next in line to run the country, assuming power.