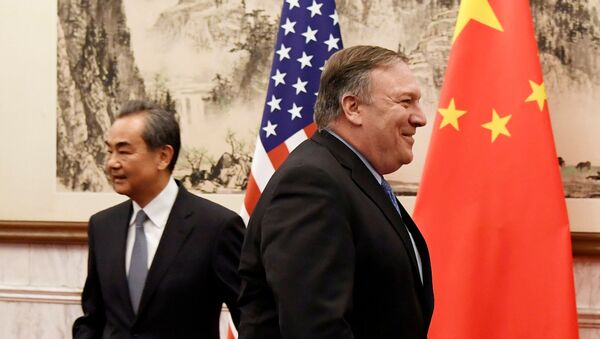 WASHINGTON (Sputnik) - US Secretary of State Mike Pompeo has compared China’s policy with regard to Hong Kong to the actions of Nazi Germany during World War II.

"The promises that the Chinese Communist Party had made in their treaty with the United Kingdom that they broke when they made the decision to deny Hong Kong people the freedoms that they had been promised were similar to some of the promises that were broken back in the days when Germany advanced against the rest of Europe," Pompeo said in a Saturday interview with The Daily Caller.

US-China relations have considerably soured, with the Trump administration accusing Beijing of unfair trade practices, human rights violations and encroaching on the special status of Hong Kong. China has denied the accusations and pointed to numerous violations of international law by the United States.

Last week, US President Donald Trump withdrew special US privileges for Hong Kong after China moved to impose new security laws on the region. Trump accused China of violating its obligations to the United Kingdom in relation to the 1984 China-UK declaration that paved the way for Hong Kong’s return to China.

A number of countries including the United States and the United Kingdom have called on Beijing to reconsider introducing the legislation and have threatened to introduce sanctions against China and Hong Kong. Other countries including Russia have stressed that issues related to Hong Kong are China's domestic affairs and should not be interfered with.