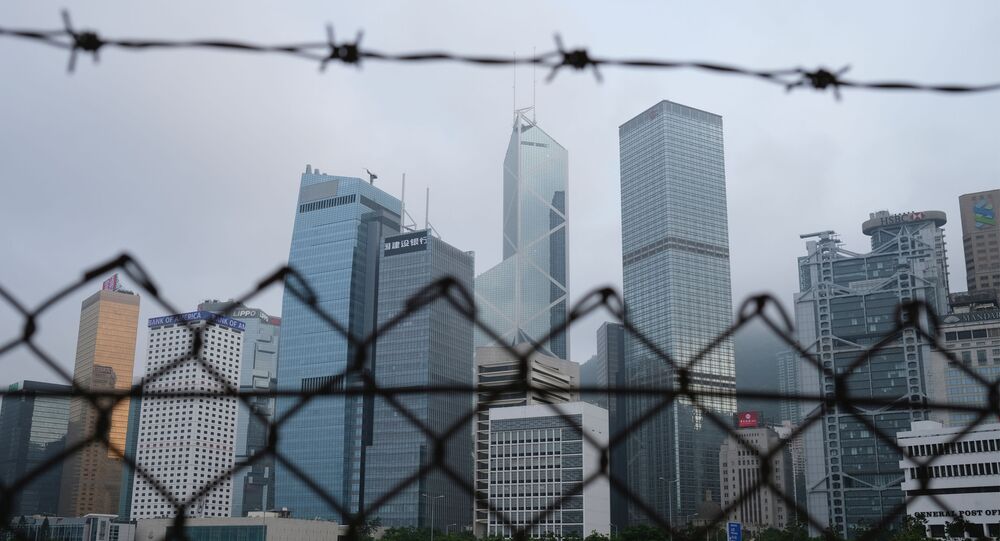 Earlier, UK Prime Minister Boris Johnson stated he was prepared to offer the right to live and work in Britain to some 3 million Hong Kong citizens eligible for a British National Overseas passport, in the event that Beijing proceeded with enforcing its security legislation within the city.

The UK has been slammed by China’s foreign ministry for what it labelled as “gross interference” in the country’s affairs.

Ministry spokesperson Zhao Lijian said at a press briefing on 3 June that it was time for Britain to recognise and respect the fact that Hong Kong has returned to China, and stop using the Sino-British Joint Declaration as an excuse to make irresponsible remarks.

The spokesperson underscored that the UK’s historical link with Hong Kong arose from a period of “invasion, colonialism and unequal treaties”.

“The UK flagrantly claims that the Hong Kong-related legislation is 'authoritarian'. Well, this is precisely the word to describe its colonial rule in Hong Kong… To quote its own words, we urge the UK to 'step back from the brink', reject the Cold-War mindset and the colonial mentality, and recognise and respect the fact that Hong Kong has already returned to China as a special administrative region. It should abide by international law and basic norms governing international relations and immediately stop interfering in Hong Kong affairs and China's domestic affairs. Otherwise, there will be consequences,” said China’s Foreign Ministry spokesperson.

The National People's Congress of the People's Republic of China passed a resolution at the end of May, under which the NPC Standing Committee would be in charge of developing a national security law for Hong Kong that bans secessionist and subversive activity.

In response to the legislation, UK Foreign Secretary Dominic Raab said on 2 June in a statement in the House of Commons on the situation in Hong Kong that the UK had respected the Sino-British Joint Declaration, but that China's “authoritarian national security law” in respect to Hong Kong undermined the "one country, two systems" framework. According to Raab, Beijing’s decision to impose the new security law allegedly lies in conflict with its international obligations, assumed under the Joint Declaration.

© AFP 2021 / ANTHONY WALLACE
An activist holds a British passport while standing in front of placards carrying a message using International Code of Signals (ICS) flags, during a gathering outside the British Consulate-General building in Hong Kong on August 21, 2019

The UK’s position on the issue is rooted in the joint declaration between the two countries, registered with the UN, which had paved the way for the handover of Hong Kong in 1997, pledging the city 50 years of autonomy from that date, with protection of its rights and freedoms, writes The Guardian.

Subsequently, UK Prime Minister Boris Johnson revealed in an op-ed article, published on 3 June in the Hong Kong-based South China Morning Post that his country was prepared to introduce changes to the immigration system to allow Hong Kong residents eased access to immigration and UK citizenship if China enforced its national security law for the city.

Johnson was referring to some 350,000 Hong Kongers, the holders of a British National Overseas passport, who would be granted an extendable 12-month visa and further immigration rights, including the right to work, with another 2.5 million eligible to apply for the aforementioned passports.

"If China imposes its national security law, the British government will change our immigration rules and allow any holder of these passports from Hong Kong to come to the UK for a renewable period of 12 months and be given further immigration rights, including the right to work, which could place them on a route to citizenship", said Johnson in the article.

While the UK’s offer was hailed by protesters in Hong Kong, many were cited by The Guardian as preferring international efforts in the form of possible sanctions against China or officials in Beijing, instead of just “sanctuary for those who want to flee”.

“I think it’s a shame in a way that they only offer us an exit, and do not offer to stand by us in our fight for Hong Kong,” a veteran activist, Lee Cheuk Yan, was cited as saying.

Concerns have also been voiced that the UK offer would exclude Hong Kong youth, who have been spearheading the year-long protest movement, writes the outlet, as British National Overseas passports are issued only to people born before the 1997 end of British colonial rule.