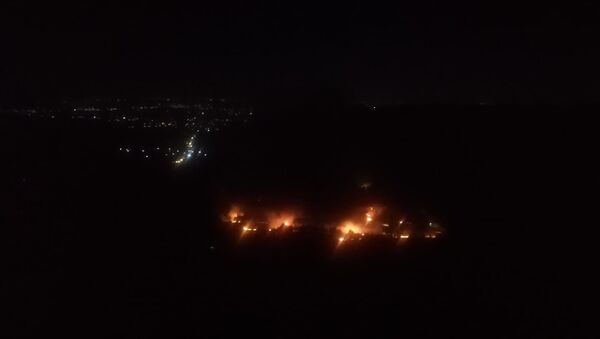 © Photo : Twitter / @guyelster
Subscribe
International
India
Africa
Another report on what is seen by Syrian media as "Israeli aggression" emerged Thursday after a missile appeared in the sky over the city of Masyaf, in Syrian province of Hama.

Video and photos showing an alleged aftermath of an "Israeli attack" in the city of Masyaf, Syria, have appeared online. The incident, described by the Syrian news agency as "Israeli aggression", took place on Thursday, hitting the outskirts of the city and causing no casualties.

Footage of a missile in the sky over Masyaf was shared on social media along with photos and video of the alleged aftermath of the strike.

There is a "scientific" center in the area, that is suspectedly develops precise missiles and chemical weapons. It was attacked several times since #Israel starts its not-so-shadow war against #Iran in #Syria pic.twitter.com/IYxAh1EahF

#UPDATE
Footage of what is being described as one of the sites targeted in Masyaf, western Syria, by Israeli warplanes from Lebanese airspace. pic.twitter.com/HxVNmejMe9

​The incident was not commented on by Tel Aviv, as has happened repeatedly throughout the year following missile strikes considered by Syrian media as the Israeli military targeting Iranian military assets alleged to be in the country. Damascus has denounced the Israeli attacks, insisting that they violate the country's sovereignty.