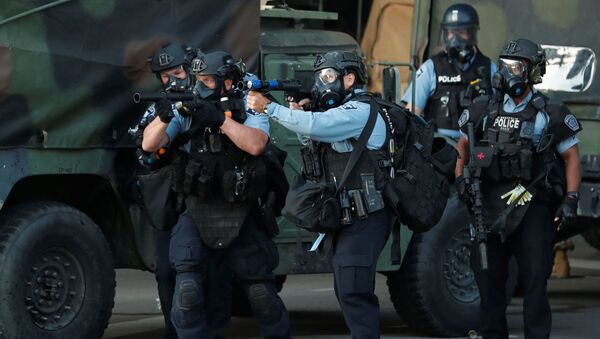 ​The statement comes after US President Donald Trump praised law enforcement officers for securing the White House and capital of Washington, DC, the previous night, saying many people were arrested amid protests against police brutality and racism.

Trump said on Monday he was taking presidential action to mobilise all available federal resources to respond to ongoing protests over the killing of George Floyd, including the deployment of thousands of armed troops to quell riots in the nation's capital city.

The US president further said if the governors of US states refuse to take actions necessary to end riots, he will deploy the US military to "quickly solve the problem for them". Trump added that he is dispatching thousands of "heavily-armed" soldiers, military personnel and law enforcement officers to stop the rioting and looting in Washington, DC.

Mass demonstrations across the United States erupted against police brutality and racism on 25 May, after George Floyd, an unarmed 46-year-old African American man, died in police custody in the US city of Minneapolis. Some protests have turned into violent riots that include arson and widespread looting. The protests broke out after a video surfaced showing white police officer Derek Chauvin kneeling on Floyd's neck for more than eight minutes before the detainee became unresponsive.