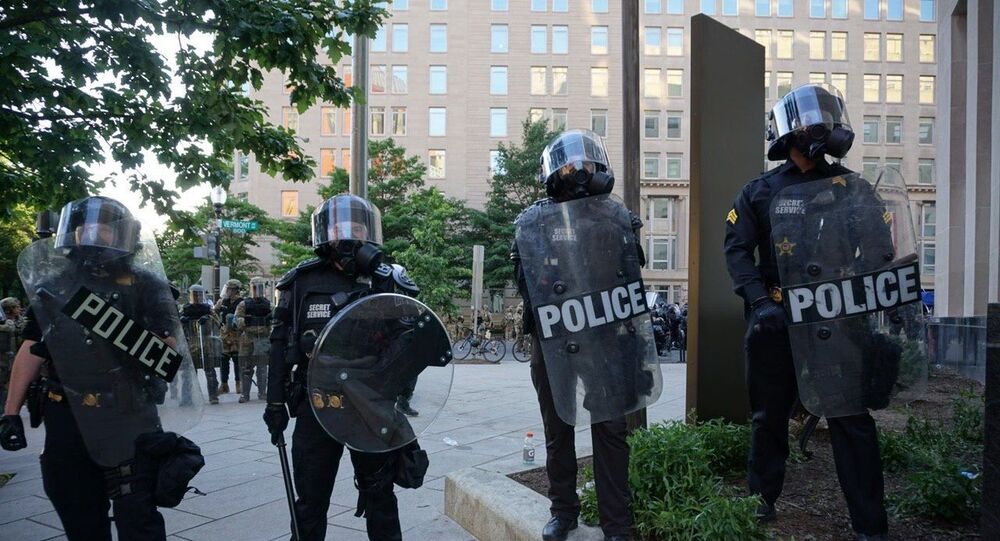 Monday was a tough day for Washington DC, like dozens of other cities across the country, as the demonstrations and protests over the killing of George Floyd by a police officer marched on. In order to restore order President Donald Trump has decided to deploy "additional federal assets" in the nation's capital.

Following Sunday's outbreak of violent riots that included looting, arson, and vandalism over the murder of George Floyd at the hands of the police, a curfew was imposed in the US capital. In the wake of the riots US President Donald Trump decided to "mobilise all available federal resources - civilian and military - to stop the rioting and looting".

During a speech at the White House, Trump "strongly recommended" that every governor deploy the National Guard in numbers sufficient to "dominate the streets".

He also warned that if a city or a state refuses to do so, he will deploy the US military and "solve the problem for them".

Amid Trump's announcement on maximising the federal security presence in the city, military cars were spotted in Washington DC and police forces cordoned off areas in the US capital in order to prevent further escalation.

Police cordon off area in Washington DC as curfew in the capital begins at 7 p.m.#GeorgeFloyd pic.twitter.com/Lcu6btw0jA

​One of the actions undertaken by Trump in order to restore order was the deployment of the military police on the streets.

A video of the Chairman of the Joint Chiefs assessing the military presence in the city was also shared on social media.

Riots and Looting Continue in US

​Other regions of the country also faced a new day of protests. In New York, stores on Madison Avenue were looted, in a scene described by social media users as "very tough", while in St Louis, protesters attacked local police, hurling firecrackers and bottles at law enforcement.

#BREAKING - protesters launching firecrackers and bottles at police SLMPD HQ in #STL - the smoke in this video is from a firecracker pic.twitter.com/DeYlF9QpVx

​Law enforcement also showed up during a looting incident on Sunset Boulevard in Los Angeles, as rioters broke into a Rite Aid store.

​Another video showed arson occurring near an apartment building in Van Nuys, California.

Arson occurring in Van Nuys near an apartment building at a local business pic.twitter.com/3n53icq5iX

​The protests across the US were sparked by what the Hennepin County medical examiner on Moday determined was the homicide of George Floyd, an African American resident of Minneapolis, killed by police officer Derek Chauvin. As confirmed by the official autopsy results, it was asphyxia that caused his death due to Chauvin pressing his knee into Floyd's neck for nearly ten minutes.