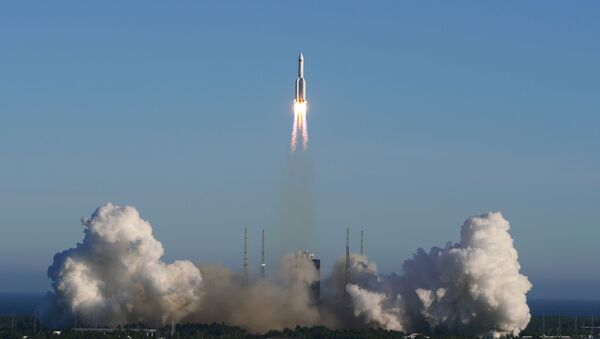 China has set a goal to become a major space power as a means of catching up with Russia and the United States, pursuing ambitions to launch missions to the red planet and the Moon.

China will launch its first mission to Mars in July or August, according to the director of China Aerospace Science and Technology Corporation (CASC), Bao Weimin. Earlier, the name of the mission was revealed as 'Tianwen', translated as 'Questions to Heaven'. The Tianwen-1 spacecraft is planned to be carried by a Long March-5 rocket this summer and is intended to reach Mars in February 2021.

"Between July and August this year, we will use the Long March-5 carrier rocket to launch [the spacecraft]", Bao stated in an interview with CCTV on Monday.

Bao elaborated that the mission is tasked with putting a probe into orbit around Mars, and subsequently to land a robotic rover on the surface of the fourth planet from the sun, which is expected to operate on the surface for a period of some 90 Martian days, around three Earth months.

"The first key point of the mission will be ensuring that the orbiter gets captured by the gravity field of Mars. And the next one will be that the landing takes seven to eight minutes", Bao told CCTV.

In November 2019, China successfully landed a rover in an earthbound test experiment, simulating the robot contacting the red planet's surface, hovering and avoiding obstacles. In January 2019, China became the first nation to land a rover on the dark side of the lunar surface.

The country's space ambitions involve the Earth's satellite as well, as China plans to put a space station on the Moon by 2022 to accommodate from three to six astronauts. The project was announced as NASA continues to work out on their Artemis programme that envisages astronauts living on the surface of the moon by 2024, sending a man and the first woman astronaut to the Moon. The programme is intended to become a 'gateway to Mars', ensuring a human presence on the red planet after 2024.

The United States has boosted their engagement in the development of their space industry, having successfully launched the first private company spacecraft to the International Space Station (ISS), the SpaceX Crew Dragon. This summer, the US plans to launch its fifth exploratory vehicle to Mars as well, which is expected to arrive at around the same time as the Chinese Tianwen-1.