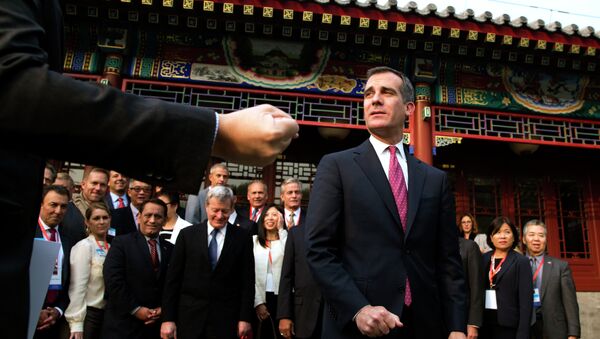 © AP Photo / Ng Han Guan
Subscribe
As US states look to reopen local economies and send people back to work amid the ongoing coronavirus pandemic, authorities are urging citizens to wear face masks as a means of reducing the spread, even as social isolation measures loosen.

Los Angeles Mayor Eric Garcetti lambasted US President Donald Trump on Thursday for appearing in public outside of the White House while not wearing a face mask.

The LA mayor stressed that wearing masks is a gateway to "increasing freedom" and increased "economic activity", adding said that "modeling" the use of protective face covering is important for leaders.

​Users responded to the mayor's comments with praise.

​Others asked why Joe Biden, the presumptive Democratic presidential candidate in the 2020 election, has not been seen wearing a mask.

And yet you can't find any images of @JoeBiden wearing a mask on Google or anywhere else.

It's almost like #Democrats know that everything they say is BS. https://t.co/LCZwD2f80j

​Democrat lawmaker and current governor of hard-hit New York state, Andrew Cuomo, was also the target of criticism as some netizens asked if Garcetti had asked the New York Governor why he was not seen wearing a mask.

Then call out @NYGovCuomo too @Ericgarcetti, he refuses to wear a mask in public also! #WearAMaskNY (except if ur name is Cuomo)!
RT @thehill: LA mayor calls out Trump ahead of Ford plant visit: "Real men wear face masks" https://t.co/OfWN8C17sd pic.twitter.com/ws4miOx55N

​As Trump geared up to head to a Ford ventilator assembly plant in Michigan without wearing a mask, despite company and state guidelines, users have suggested that Trump wear protection when visiting their states.

And yet you can't find any images of @JoeBiden wearing a mask on Google or anywhere else.

It's almost like #Democrats know that everything they say is BS. https://t.co/LCZwD2f80j

​The mayor's comments come as authorities across the US have stepped up messaging to get citizens to wear face masks as economies look to loosen social distancing measures.