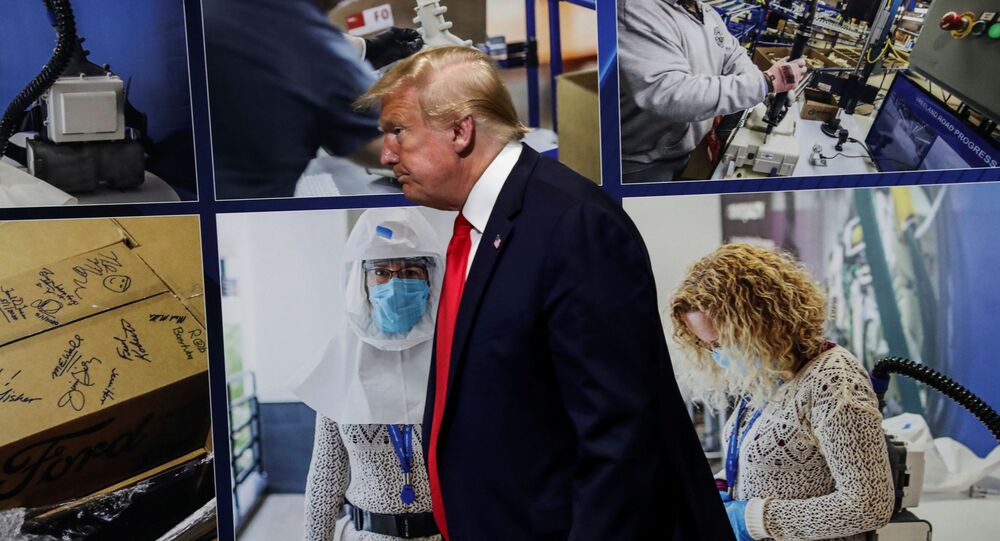 US President Donald Trump refused to wear a mask during a Thursday tour of a Ford facility in Ypsilanti, Michigan, ignoring the rules of the facility and the state's executive order.

"I had one on before... but I didn't want to give the press the pleasure of seeing it," Trump is quoted as saying in response to criticism. Trump also said that it was "not necessary" for him to be wearing a mask, because he was tested for the novel coronavirus that morning.

​The Ford facility is producing ventilators and personal protective equipment amid the COVID-19 outbreak.

This is not the first time that Trump has drawn flak for not wearing a mask in a public setting. In early May, Trump was criticized for failing to wear a mask while touring a Honeywell facility in Phoenix, Arizona, which manufactures N95 respirators for health care workers.

Trump sported goggles during the tour but left his face bare, despite signs around the facility clearly stating that masks are required, according to reporters who were present. However, an administration official said to reporters that Honeywell had told officials they weren’t required to wear masks while touring the facility.

Following Trump's visit to the factory, the Ford Motor Company issued a statement, revealing that Bill Ford, the executive chairman of the company, had asked Trump to wear a mask, but that the president had later removed it.

"[Trump] wore the mask during a private viewing of three Ford GTs from over the years," reads the release.