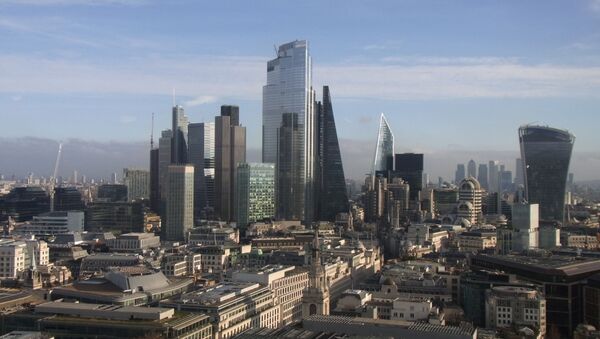 Mohamed Elmaazi
All materialsWrite to the author
A "Marshall Plan for the Pandemic" is needed if economies are to properly rebound after The Great Lockdown, according to a long-time economist based in the UK's financial district. He also warns that "simply pumping trillions" into the financial system won't deliver a recovery on its own.

According to the International Monetary Fund, even prior to the current global recession, the real GDP growth rate per capita had been subdued or declining, public investment had been declining and the growth of investment per capita in emerging markets had also been slow.

Michael Roberts has worked as an economist with investment research firms in the City of London for over 30 years. He explains that the COVID-19 lockdowns represented the "tipping point" for a global economy which was already headed towards recession.

Sputnik: Jay Powell, Chair of the US Federal Reserve Bank, recently said that the current economic crisis is completely due to COVID-19 and the lockdown policies and not due to any underlying problems in the economy.

How would you respond to Powell's remarks?

Michael Roberts: Just as they did during the global financial crash in 2008-9, the monetary authorities do not want to admit that the current crisis has its origins in fault lines in the major economies. Only last September [2019], the fed was forced to inject billions in emergency liquidity when credit markets crunched. That credit squeeze reflected a significant slowdown in global growth, including [in] the US.

Most countries experienced their lowest real GDP growth rates in 2019 since the end of the great recession in 2009. Indeed, business investment was falling in most major economies; Japan and parts of Europe were already in a recession or close to it; while several large emerging economies like Mexico, Turkey, Argentina and others were in a slump. So the world economy was weakening and in no shape to handle the pandemic.

The pandemic was the tipping point.

Sputnik: Data from the International Monetary Fund and the Penn World Tables suggest that the US and other major economies were headed towards recession even before the COVID-19 lockdown.

Michael Roberts: Yes, IMF real GDP growth figures for 2019 were at their lowest in ten years. Global trade was falling and the manufacturing sectors of many major economies were contracting. Moreover corporate profits, the life blood of corporate investment, had stopped rising in the major economies, with profitability globally at lows. 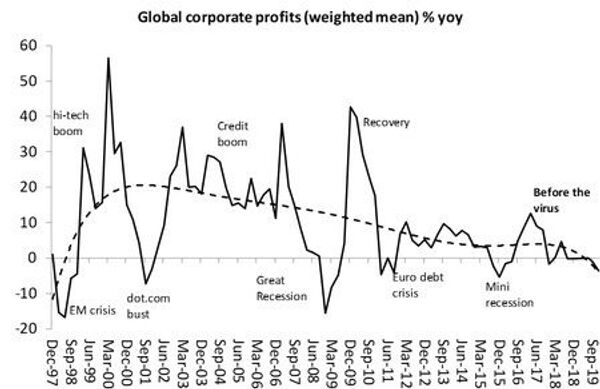 Sputnik: Can you explain, to a lay-person, the evidence that supports this position and whether you agree with it? 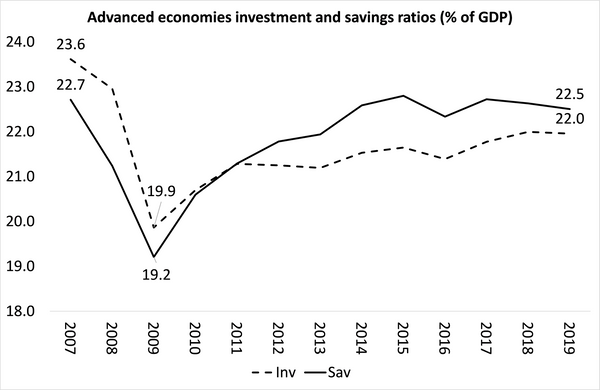 Sputnik: Why should it matter whether or not the US and the global economy were headed towards a recession before "The Great Lockdown"?

Michael Roberts: The reason it matters is that because the world economy was already showing signs of significant weakness and close to recession in GDP, trade and investment, then it will take much longer to come out of the pandemic slump than otherwise. Many companies (even large ones) may not return once the lockdowns are over and 'normal' business resumes.

Jobs and incomes will be permanently lost. This phenomenon is called in economics, hysteresis, where short-term damage morphs into long-term loss. That is the likely prospect now - something that Fed chair Powell admitted in his recent speech.

Sputnik: Where do you think we are headed if current government policies don't change and why?

Michael Roberts: There is optimistic talk of a V-shaped recovery, i.e. a quick return to previous GDP and investment growth ([which was] already weakening as I have argued). But that assumes lockdowns end quickly, there is no long-term damage, that there is no 'second wave' in the virus and a vaccine is found soon.

More likely, economies will have a U-shaped or even l-shaped recovery because pumping trillions of credit money into the financial system will not deliver recovery if profitability in the productive sectors remains low. What is needed is a massive government investment programme as adopted during WW2 in civilian and green projects to restore growth and employment. A 'Marshall Plan' for the pandemic.

Sputnik: How are everyday people affected by the current crisis?

Michael Roberts: Several studies show that workers earning the lowest pay and in so-called low-skill (but necessary) jobs  are taking the biggest hit. Professional workers are able to work from home and have not seen much income loss. Others who must go to work are taking the biggest losses and also face the prospect of having no job to go back to or only after wages and hours cuts.