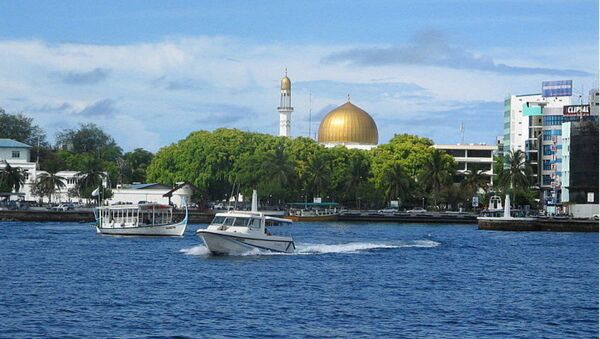 New Delhi (Sputnik): China and India, which have faced off along the border between the two countries for past few days, remain locked in a silent confrontation despite the COVID-19 pandemic; Beijing’s attempts to expand its political influence among the island nations of the Indian Ocean have angered New Delhi.

In another development affecting relations between India and China, the latest satellite images of face-lifted Feydhoo Finolhu Island in the Indian Ocean have posed serious concerns for New Delhi.

#Feydhoofinolhu near #Male, #Maldives leased in 2017 for 50 years to #China sees a dramatic facelift (2020) courtesy land reclamation .. expanding not just its size but also the #OnebeltOneRoad footprint in the #IndianOcean #StringsOfPearls pic.twitter.com/lKPNAMqnZ2

The island, which is almost 600 km from India and close to Malé airport, was leased to an undisclosed Chinese company for 50 years at a cost of about $4 million in December 2016 by the Maldives.

Maldivian Government sold #Feydhoofinolhu to a Chinese company for $4 million with no bid & company is undisclosed!pic.twitter.com/ijBpFwAAA1

​Geopolitical expert Hans Kristensen was reproachful of the project for environmental reasons, speculating that China might destroy the reef in its efforts to expand.

Looks like China is starting a South China Sea-like reef destruction in the Indian Ocean. #Feydhoofinolhu (4.211417°N 73.484213°E) reportedly was bought (leases) by Chinese company in 2016 https://t.co/wSqAreIGaN This project is only 600 km from India. https://t.co/UUsAHI5xLE

​In the strategically important South China Sea, Beijing has built seven artificial islands following reef destruction in the Spratly Islands. It took huge amounts of sand and coral reefs to add 1,300 ha to the islands. China's ministry of defence said in 2018 that China has a "natural right as a sovereign nation" to deploy military assets to its bases in the Spratly Islands.

However, China claims that it enjoys sovereign rights and jurisdiction over the relevant waters in the South China Sea where infrastructure development took place.

As part of its One Belt One Road connectivity initiative to increase its footprint in the Indian Ocean Region, China has been attempting to build infrastructure in the South East Asian countries as well.

Like the Island in Maldives, Beijing has been engaged in key infrastructure projects in Mayanmar as well, such as New Yangon City, Kyaukphyu Deep-Sea Port and Industrial Zone and the China-Myanmar Border Economic Cooperation Zone.

With the heightened activity of the Chinese fleet in the Indian Ocean Region over past few months, experts have highlighted the developments as part of Beijing’s String of Pearls strategy — coined by the US consultancy Booz Allen Hamilton in its 2005 report “Energy Futures in Asia” – to expand its naval presence throughout the Indian Ocean Region (IOR) by building maritime civilian infrastructure in friendly countries.

While India has been desperately trying to counter China’s attempts to encircle the country, which holds important position in the Indian Ocean region, Beijing has denied the existence of any such strategy.

Meanwhile, India and China were in a tense face-off near the Naku La sector (ahead of Muguthang Valley) pass at a height of over 5,000 metres in India’s Sikkim on Saturday. As many as 11 soldiers, including four Indians and seven Chinese, were injured in the violence on the Line of Actual Control.