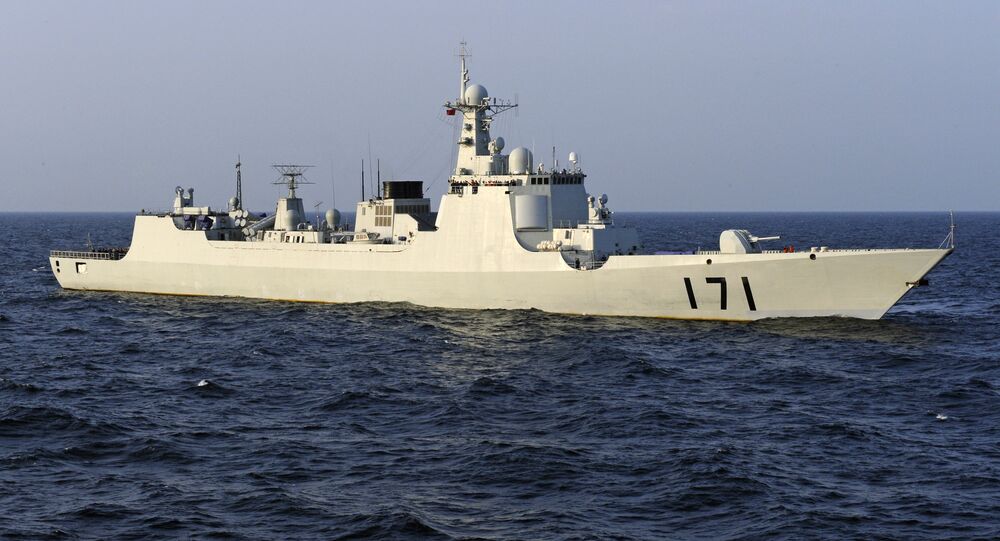 New Delhi (Sputnik): At a time when global shipping, including that of China’s trade, has fallen to a record low due to the COVID-19 pandemic, Beijing has started deploying warships to the Indian Ocean. The Indian Navy has announced its operational preparedness, but there are severe costs for the anti-China maritime posture in the region.

The Chinese Ministry of National Defence (MND) announced the deployment of the 690 naval personnel-strong 35th Task Force of the People’s Liberation Army Navy (PLAN) to the Gulf of Aden on Wednesday in order to carry out anti-piracy patrols in the Indian Ocean, which is considered India’s geopolitical sphere of influence.

The PLAN's guided missile destroyer the Taiyan and the frigate Jingzhou will for the first time ever protect "ships and vessels” passing through the region.

© AP Photo / Rafiq Maqbool
Indian Navy 'Prepared for Immediate Deployment' Amid China's Increased Activities in Region
The task force, comprising at least two dozen naval helicopters and replenishment oiler the Chaohu, will also support vessels off the coast of Somalia, where the PLAN has been carrying out naval escort missions since December 2008.

The announcement comes at a time when the International Maritime Bureau’s latest global piracy report shows zero hijackings in the last two quarters and no incidents around Somalia. Global shipping data also suggest a massive decline in the number of ships calling on ports, including in Europe and China.

Explaining the purpose of such a deployment at this time, Captain D.K. Sharma, who retired from the Indian Navy in September 2019 after serving as the spokesperson for 10 years, tells Sputnik: “The foothold which the PLA Navy established in 2008 in the Indian Ocean Region (IOR), in the garb of anti-piracy missions, won't be diluted at any cost”.

The captain brings up Beijing’s strategy – termed the "String of Pearls" by the US consultancy Booz Allen Hamilton in its 2005 report “Energy Futures in Asia” – to expand its naval presence throughout the Indian Ocean Region (IOR) by building maritime civilian infrastructure in friendly countries.

“It (String of Pearls) was a well thought-out strategy. Also, they (Beijing) have interests in the Indian Ocean Region with Djibouti, Gwadar, Myanmar Bangladesh etc., as part of their One Belt One Road programme. Anti-piracy patrol is an alibi to cover up their other designs in the overall scheme of things”, the captain says.

Ever since the 2005 report, many strategic analysts have also termed it as a strategy to encircle India, which has a dominant position in the Indian Ocean Region. However, China has denied any such strategy.

“Happy Hunting” Has Its Cost

The Indian Navy has clearly indicated that it will not lose its stance in the Indian Ocean Region, despite the battle against COVID-19.

© AFP 2021 / ANTHONY J. RIVERA
Beijing Resumes Operations in South China Sea as US Navy Struggles to Cope With Coronavirus
For the second time in a month, when it is assisting civilian authorities in the fight against COVID-19, the Indian Navy released a statement on 18 April stating: “Our assets continue to remain on patrol covering a vast oceanic swath from the Straits of Malacca in the East to Bab-el-Mandeb in the West, including undertaking Operation Sankalp to provide reassurance and protection to our merchant vessels and anti-piracy patrols in Gulf of Aden”.

Stating the impact of China in the Indian Ocean Region, former Indian Navy spokesperson Sharma says: “Presence of Chinese PLA Navy ships in Indian Ocean Region [does] make a difference to [the] Indian Navy as they have to keep a constant eye on their movements. These ships are involved in many other activities apart from normal patrols in Gulf of Aden”.

Sharma also states that this will only add a financial burden on the Indian Navy, which has also increased its strategic co-operation of-late to counter China.

Indian Navy commanders have raised concerns over critical capability gaps in ship-borne helicopters, fleet support ships, and submarines. This means that continuous deployment of these assets raises the possibility of accidents and encounters at sea.

These concerns compound the already existing financial crisis caused by COVID-19, as a top official of India's Defence Ministry told Sputnik that the defence budget is being reduced by 20-30 percent this year.

For 2020, the Navy received around $3 billion for revenue expenditures and around $3.8 billion for capital expenditures, which is $3 billion lower than the projected expenditure this year. The Navy had already pulled back its requirement of Mine Counter Measure Vessels, helicopters, and P-8I reconnaissance aircraft.

Naval Deployments for All

The two Asian giants have emphasised time and again that their naval deployments are not only for their own purposes, but they can provide assistance to their friendly neighbours as well.

© AP Photo / Rafiq Maqbool
Eyeing China, India Boosts Presence in Indian Ocean, Giving Maldives Patrol Vessel, Financial Aid
Past incidents suggest that such deployments come in handy in times of crisis to governments having close relations with Beijing. This was evident in 2018, when the Abdulla Yameen government announced a state of emergency in the Maldives and India had to rush its aircraft and ships to its southern bases.

As China despatched its naval combat force — the first time in four years — consisting of around a dozen warships, India called off any strong action against the then Abdulla Yameen government, which was considered pro-China.

However, India has been moving forward to establish a new base on Assumptions Island in the Seychelles and negotiated military access to naval facilities at ports in Oman and Indonesia last year.
COVID-19 Challenges to Navy
Indian Navy Chief Karambir Singh told commanders in a video message on 7 March that “it can no longer be business as usual”.
Hence, the Chinese deployment in a time of crisis poses a big challenge for the Indian Navy, whose warships are teeming with men more than other navies — as evident during the multilateral exercise — to operate in full capability while maintaining physical distancing to remain COVID-19-free.