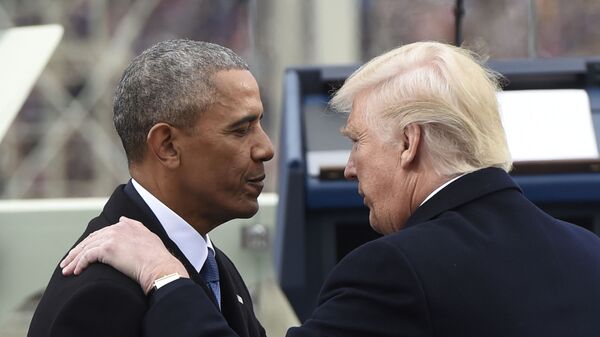 Michael Flynn is one of the few Trump associates who have been convicted as part of the Mueller investigation into an alleged conspiracy between the US president and Russia. That probe, which dominated the headlines for more than two years, failed to establish a link between Trump and Moscow.

Donald Trump has accused the Obama administration of having committed "the biggest political crime in American history" by prosecuting Michael Flynn.

Thursday's decision by the Justice Department to drop the criminal case against Flynn, Trump's first national security advisor, marked a big victory for the president, who has long argued that Obama's White House had gone after Flynn in a bid to damage the incoming president politically.

The Justice Department ruled that Flynn’s statements in a January 2017 interview to the FBI, in which he was accused of lying about his conversations with a Russian official, did not warrant a criminal prosecution.

The end of Flynn's three-year-long legal battle followed the release of FBI communications which showed that the Bureau's leadership was discussing that same month whether they should "get [Flynn] to lie" or "get him fired".

It has also been revealed that the operation targeting Flynn found no evidence implicating the general in "colluding" with Russia and would have been closed if then-FBI Deputy Assistant Director Peter Strzok, later fired for anti-Trump text messages, had not intervened to keep the case open.

The bombshell materials strongly hinted that the agents had underlying motives for investigating Flynn, rather than the ostensible reason that he was discussing potentially illegal issues with Russia.

The biggest political crime in American history, by far! https://t.co/m5nPdUHt4u

"He was targeted by the Obama administration and he was targeted in order to try and take down a president," Trump said of Flynn on Thursday.

The following day, Barack Obama reportedly slammed the decision to drop charges against Flynn in a web talk with former members of his administration.

Sidney Powell, one of Flynn’s lawyers, claimed in a Sunday interview that top FBI officials had tried to keep Flynn unaware that he was a target of an investigation and attempted to "set him up and frame him". Obama, she added, was aware of the plans.

Trump has tweeted out the word "Obamagate" more than once over the weekend, suggesting an Obama link with the Flynn investigation.

Who is Michael Flynn?

Flynn, a retired Army lieutenant general and life-long Democrat, was one of Donald Trump's most ardent supporters during the 2016 campaign. He joined the Trump administration as national security advisor in January 2017 and resigned a month later amid a flow of intelligence leaks that he had secretly discussed US sanctions with Russian ambassador Sergei Kislyak and tried to cover up the conversations.

Flynn later pleaded guilty to having made false statements to the FBI, which had questioned him as part of the broader Trump-Russia investigation.

He admitted that he asked Kislyak, and Russia, not to retaliate against Obama's sanctions and to delay or downvote an upcoming UN Security Council resolution that would have condemned Israeli settlement construction in the West Bank (Russia backed that resolution).

The retired general went on to co-operate with Robert Mueller, the head of the now-failed Russia probe, but later changed tack and sought to withdraw his guilty plea, while Trump openly toyed with the idea of pardoning the retired general.