No Hope for 2020: Turkey’s Bar, Cafe, Restaurant Owners Pessimistic About Situation Amid Pandemic 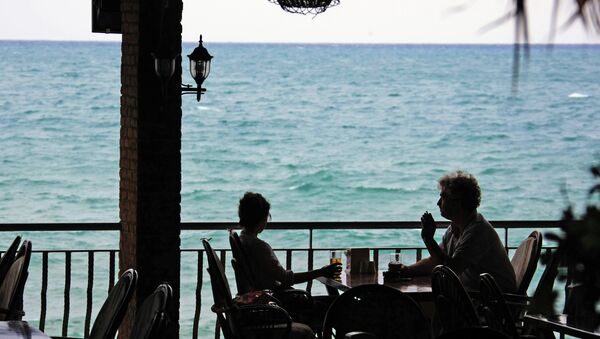 The owners of several bars, cafes, and restaurants in major Turkish cities – Istanbul, Izmir, and Edirne – told Sputnik about the conditions under which they have existed for more than a month and a half since the severe restriction measures were imposed in Turkey due to the coronavirus.

According to representatives of small businesses, there is no longer any hope to improve their situation in 2020 because of accumulated debts, and the period of easing restrictions and normalising the situation regarding the coronavirus for them means paying off debts and a period of stagnation.

Osman Koray Gudenoglu, the owner of a cafe in the Asian neighbourhood of Kadikoy in Istanbul, says that trade turnover had dropped 25-30% even before the epidemic due to perceived latent inflation. At the same time, a sudden Interior Ministry circular order to close restaurants and cafes across the country made the situation even worse.

“If my cafe is closed until mid-June, the losses will be tens of thousands of lire. And if you add credit, rent, debts, and taxes, which soon have to be paid, the situation becomes desperate”, the cafe owner says.

Gudenoglu believes that once the process of gradual normalisation begins, his income, given the accumulated debts, will be halved compared to what it was before the pandemic.

“Because of the introduced measures, the economic difficulties encountered by clients, as well as people's justified health concerns, the number of clients and the value of the cheque per person will be insignificant. My income expectations are 40-50% lower compared to normal times. Of course, the risks of the epidemic should not be underestimated and necessary measures should be taken. But for small businesses like us, any restrictive measures are very tough”, he explains.

Gudenoglu also notes that the entrepreneurs could not get the support they expected. According to him, small business owners were expecting the authorities and municipal administrations to make all kinds of tax exemptions for them in the period from March to September, a sort of constructive support and assistance with the rent issue. However, they did not get any support. As a result, the property owners have continued to charge full or half of the rent during this process.

“We promised to pay the remainder to those who charge half, right after the opening”, he says.

Melih Dogan, the owner of three restaurants in Istanbul's European part, also says that they found themselves in a difficult situation as a result of the emergency caused by the coronavirus epidemic.

“We found ourselves in a difficult situation. Since the places are closed, we don't get any money”, the restaurant keeper notes.

“At present, there are 50 people working, none of whom are paid. The employer is doing their best in this process. However, the state must do so as well. The amount of the benefit for those on unpaid leave is 1,170 lire. Those who make decisions should think about how people will survive on this money. Moreover, the normalisation process may continue until the end of 2020, or even 2021”, he stresses.

Aydin Kalayci, president of the Beyoglu Association of Entertainment Venues (BEYDER), says that business representatives in Beyoglu are no longer expecting anything from 2020 and adds that this district has been hit the most by the coronavirus in Turkey.

“I believe the year 2020 is over for Beyoglu. There's no telling how many outlets there will be left. Most store owners have dismissed their teams, their staff”, he notes.

According to him, most of the staff has had to be fired. Many of those left unemployed go to factories and other sectors. He says one of his acquaintances is an experienced waiter who now makes masks in a factory. The picture is depressing, the economic situation for members of the business community is very difficult, much worse than the economy as a whole, he believes.

“Dark days ahead for all of us”, Kalayci says.

Owners and employees of restaurants, cafes, and bars have found themselves in a difficult situation not only in large cities, where strict restrictions on movement are in force, but also in many other cities in Turkey.

Thus, Mehmet Akkas, the owner of a restaurant in Edirne, believes that due to the population density in Istanbul, the catering sector enjoys more stability. However, Edirne is a small city and thus there is a very difficult situation, despite the absence of movement restrictions. Workers and employees have returned to their homes, students have returned to their homeland and all this has had a negative impact on Edirne's trade, whose local population is small. Many shops and restaurants have closed.

“We're trying our best to survive. My brother and I, so as not to fire our employees, split shifts, all employees work for half a week. We are doing our best to ensure that both the company and the employees survive this period with the least losses”, the restaurant owner in Edirne says.

In an interview with Sputnik, the owner of a coffee bar in the Foca district of Izmir, Ayhan Atac, said that his place is currently closed. But the difficulty is that he is not the owner of the property, he rents it. His main profit is from June to September, as the season is very short.

“What we make in summer lets us live all year long”, he says.

However, he believes that this year they probably will not make any money. Even if the normalisation process starts in June, Ayhan Atac doesn't expect a rapid influx of tourists.

“You can understand people. I wouldn't go on vacation either as soon as the restrictions are lifted”, the coffee bar owner says.

Global Economy to Shrink 2.8% in 2020 Due to Coronavirus Pandemic - Report
However, Ayhan Atac has not fired anyone, only one employee left to work at a factory. The rest of the employees took a short-term allowance. However, as they lack this money, Ayhan has allocated a part of his pension to give to his employees.

“I have been supporting them [my employees] for two months now. But we rent a house and a workplace. They say in the news that state-owned banks provide support to small businesses. But who exactly receives this support, I do not know. We couldn't get it”, he stresses.

But that is not the issue either. According to Ayhan Atac, if they can still somehow make it in the short term, the worst thing is the lack of understanding or the ability to anticipate when it comes to the longer term.

“I have lost hope. Even if we somehow survive this summer, we have no idea what awaits us in winter”, Ayhan Atac concludes.