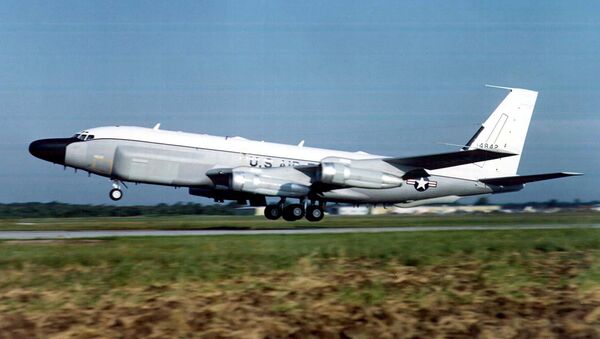 © AFP 2023 / USAF
Subscribe
International
India
Africa
The Trump administration is reportedly looking into whether Chinese tech firm Huawei being allowed to build part of the UK’s 5G wireless network has compromised its UK-based spy planes enough to force them to withdraw. US intelligence has claimed Beijing has leverage over information handled by the Shenzhen-based tech giant.

‘How Do We Protect Ourselves’

According to a Monday report by The Telegraph, a London-based daily, the US National Security Council is investigating the degree to which US spy planes based in the United Kingdom are impacted by new 5G networks in the country being built, in part, by Huawei.

The US Air Force’s RC-135 Rivet Joint, an airliner-sized electronic surveillance plane loaded down with electromagnetic equipment for monitoring communications, radar and other emissions, is believed to be the most vulnerable to penetration by the 5G network, according to the report. Washington has six RC-135s in the UK, all based at RAF Mildenhall, a Royal Air Force base about 60 miles north of London, out of which most of the UK-based US air forces operate.

RAF Mildenhall is due to close by 2024 as part of the Pentagon’s European Infrastructure Consolidation program, at which point the RC-135s would be moved to Gloucestershire’s RAF Fairford, Sputnik reported.

"This was not a bluff. You cannot mitigate the danger [UK Prime Minister] Boris Johnson is exposing the UK to by letting Huawei into the network," an anonymous US official told the Telegraph. "This review is not a punishment. This is the White House saying 'okay if they're going to go down this path and put themselves at risk then how do we protect ourselves.'"

Johnson’s government negotiated a deal with Huawei in January that allowed the Chinese tech giant to have as much as a 35% stake in the UK’s 5G network in areas deemed non-sensitive - that is, away from military and nuclear sites. Washington strongly protested the deal at the time, arguing that allowing Huawei access to any part of the network compromised the entire network.

The UK and US are part of a quintet of English-speaking nations dubbed Five Eyes, which share intelligence between them. The other nations are Canada, Australia and New Zealand, and all five have adopted an increasingly hostile disposition toward Huawei and other Chinese tech giants, which they claim can be forced by Beijing to open their databases to the Chinese government. Both Huawei and Beijing have denied that such a “backdoor” exists.

In addition to the Trump administration, Johnson has also faced pressure to renegotiate or cancel the deal from inside his own Conservative Party. Parliament member Tom Tugendhat, who chairs the Foreign Affairs Committee in the House of Commons, told Business Insider late last month that the burgeoning COVID-19 outbreak in the UK would similarly force Johnson to reconsider the British relationship with China.

"I think it's hardened many views in the parliamentary [Conservative] party,” Tugendhat said. “Clearly, it's going to have implications… It makes the Huawei position hard."

Similarly, First Secretary of State Dominic Raab told reporters on April 16, when he was deputizing for Johnson as the latter recovered from a COVID-19 infection that required hospitalization, "There's no doubt that we can't have business as usual [with China] after this crisis, and we have to ask the hard questions about how it came about and how it could have been stopped earlier.”

As of Tuesday, more than 30,000 people have died in the UK as a result of the illness - now the highest death toll from the disease anywhere in Europe. The novel coronavirus targets the respiratory system and is highly contagious. As the pandemic has worsened, Western leaders have attempted to pin the blame on China, alleging Beijing failed to take proper action to contain the virus when Wuhan was the outbreak’s epicenter, or even concealed data from other nations.

The deep irony is that in response to the COVID-19 pandemic, both Washington and London are themselves violating user privacy by tracking the movements of people infected with the virus.

Reuters reported on April 28 that a slew of private cyberintelligence firms have been busy pushing “repurposed spy and law enforcement tools” on governments around the globe.

“By manually plugging the software into a suspect’s phone, police can break in and determine where the person has gone and whom he or she has met,” the report said about hacking software made by Cellebrite, an Israeli firm.

“We do not need the phone passcode to collect the data,” a Cellebrite sales pitch for GrayKey, a password-breaking product, to the Delhi Police in India obtained by Reuters reads.

“Ultimately what Cellebrite’s GrayKey does is get a copy of everything on your device. Now, think about what’s on your phone. Not just the photos or emails,” technologist Chris Garaffa told Sputnik on Monday. “Now Cellebrite is offering these tools to more governments under the guise of tracking the spread of COVID-19. They’re suggesting to governments that they purchase these GrayKey and other devices, and when someone is diagnosed with coronavirus or dies from it, the government actually takes their phone so they can see all of their locations.”

Similarly, an app developed by the UK’s National Health Service, dubbed the NHS COVID-19 app, is intended to aid in contact tracing, an important aspect of disease control as it can establish who may have been exposed to the virus and needs to be tested or quarantined. However, British civil rights groups have raised alarm about the app’s potential to violate user privacy.

“Contact-tracing technology may require us to sacrifice deeply sensitive personal information and there can be no question of state bodies or private companies sharing our personal data other than what is absolutely necessary,” Clare Collier, the advocacy director at Liberty, a UK-based civil rights group, said in an April 24 news release.

“It is vital no one is coerced into having the app installed, and using it as a condition for returning to work or everyday life will inevitably lead to discrimination,” she said. “The opportunities presented by technology should be fully investigated, but seeking quick solutions in surveillance tools that rely on our personal data creates serious long-term threats to our rights and ways of life.”

A pilot program in the US state of North Dakota for a similar app, called Care19, sends users’ location data to a private server on Microsoft’s cloud platform, with the intention of tracing where someone has been in case they come down with COVID-19, the New York Times reported. Tim Brookins, the app’s developer, told the paper health officials could only get the data of people who both test positive for the virus and agree to share the information.

James Larus, the dean of the School of Computer and Communications Science at Switzerland’s EPFL, warned the NYT about the “consequences for privacy made possible by a crisis,” citing the example of surveillance after the September 11, 2001, terrorist attacks.

The Wall Street Journal reported in late March that advertisers were feeding the anonymized location data of cellphone users to the US Centers for Disease Control and Prevention, and from there to federal, state and local governments, with the intention of mapping socialization patterns in urban areas, so as to determine where potential hotspots might arise.

Wolfie Christl, an Austria-based technologist, told the paper that “covidwashing,” or the shoving through of privacy-violating measures under the guise of fighting the pandemic, was a major risk.

“In the light of the emerging disaster, it may be appropriate to make use of aggregate analytics based on consumer data in some cases, even if data is being gathered secretly or illegally by companies,” Christl told the paper. “As true anonymization of location data is nearly impossible, strong legal safeguards are mandatory.”