NYC Mayor Blasts 'Hypocrite' Trump, Accuses Him of ‘Stabbing His Hometown in the Back’ 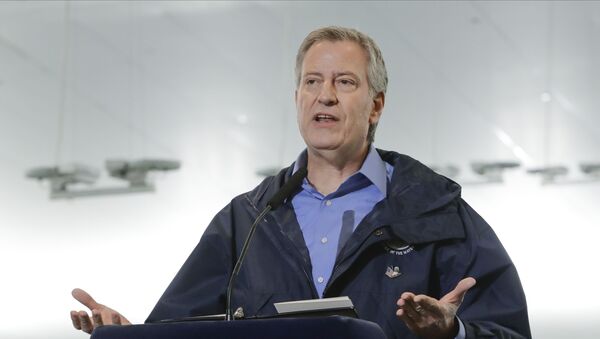 © AP Photo / Frank Franklin II
Subscribe
Earlier on Tuesday, US President Donald Trump, during an interview with The New York Post, said he rejects granting federal bailouts to states that have been affected by the coronavirus pandemic, including New York, because “they are run by Democrats”, arguing, “It’s not fair to the Republicans”.

New York City Mayor Bill De Blasio criticized on Tuesday US President Donald Trump’s comments on rejecting the idea of granting bailouts to states hit by the coronavirus crisis, including New York - the worst COVID-19 hotspot in the country.

In a Tuesday coronavirus briefing, the mayor called Trump a “hypocrite” that “seems to enjoy stabbing his hometown in the back”.

“The president of the United States, a former New Yorker who seems to enjoy stabbing his hometown in the back, [is] talking about ‘no bailout for New York,’” said De Blasio. “What kind of human being sees the suffering here and decides that people in New York don't deserve help? What kind of person does that?”

De Blasio stated that Trump is “playing politics while people are suffering” and is putting his own personal interests and those of the Republican Party ahead of American people’s needs for help amid the ongoing COVID-19 pandemic.

“Who cares who runs the states? The people need the help; there are Americans who need help right now. Do you not care about that firefighter, that EMT, that paramedic, that police officer, that health care worker because they live in a state run by a Democrat? Or a city run by a Democrat?” the mayor questioned. “Does that make them less American in your view, Mr. President?”

The New York City mayor said that federal aid is essential to help the city in the post-pandemic rebuilding process.

Earlier in the day, Trump told The New York Post that his administration does not support sending coronavirus federal funding to “all the states” that are “run by Democrats”.

“I think Congress is inclined to do a lot of things but I don’t think they’re inclined to do bailouts. A bailout is different than, you know, reimbursing for the plague,” Trump said. “It’s not fair to the Republicans because all the states that need help — they’re run by Democrats in every case”.

Trump argued that Texas and states of the Midwest are “doing phenomenal” and “fantastic” as they have only “very little debt” during the coronavirus outbreak, unlike states run by Democrats such as Illinois, New York and California.

“You look at Illinois, you look at New York, look at California, you know, those three, there’s tremendous debt there, and many others,” Trump said. “I don’t think the Republicans want to be in a position where they bail out states that are, that have been mismanaged over a long period of time”.

Democrats have repeatedly criticized the Trump administration for being slow to respond and unable to meet medical and testing needs.

On 20 April, De Blasio condemned Trump for remaining "silent" regarding the budget crisis New York City faces, adding that without adequate federal assistance the city will not be able to recover and provide public services. The city is expected to lose $7.4 billion in tax revenue due to the COVID-19 pandemic.

As of Tuesday, New York City has registered 326,606 COVID-19-related infection cases, including 25,028 deaths, according to The New York Post.

The overall number of people infected with the virus in the United States is almost 1.2 million, representing nearly a third of the global total. At least 70,272 people have died from the disease.

richard1950
6 May 2020, 03:49 GMT1
000000
Both the mayor of New York and trump are morons like the rest of the politicians there. The difference being trump was elected to go after corrupt deep state politicians which he hasn’t come through yes and probably never will. America is a failed nation.
Rokenbok
6 May 2020, 04:30 GMT1
000000
Newsfeed
0
New firstOld first
loader
LIVE
Заголовок открываемого материала
Access to the chat has been blocked for violating the rules . You will be able to participate again through:∞. If you do not agree with the blocking, please use the feedback form
The discussion is closed. You can participate in the discussion within 24 hours after the publication of the article.
To participate in the discussion
log in or register
loader
Chats
Заголовок открываемого материала
Worldwide
InternationalEnglishEnglishMundoEspañolSpanish
Europe
DeutschlandDeutschGermanFranceFrançaisFrenchΕλλάδαΕλληνικάGreekItaliaItalianoItalianČeská republikaČeštinaCzechPolskaPolskiPolishСрбиjаСрпскиSerbianLatvijaLatviešuLatvianLietuvaLietuviųLithuanianMoldovaMoldoveneascăMoldavianБеларусьБеларускiBelarusian
Transcaucasia
ԱրմենիաՀայերենArmenianАҧсныАҧсышәалаAbkhazХуссар ИрыстонИронауОssetianსაქართველოქართულიGeorgianAzərbaycanАzərbaycancaAzerbaijani
Middle East
Sputnik عربيArabicArabicTürkiyeTürkçeTurkishSputnik ایرانPersianPersianSputnik افغانستانDariDari
Central Asia
ҚазақстанҚазақ тіліKazakhКыргызстанКыргызчаKyrgyzOʻzbekistonЎзбекчаUzbekТоҷикистонТоҷикӣTajik
East & Southeast Asia
Việt NamTiếng ViệtVietnamese日本日本語Japanese中国中文Chinese
South America
BrasilPortuguêsPortuguese
NewsfeedBreaking
08:04 GMTOmicron Variant: Panic Grips Indian Officials as Passenger From South Africa Tests COVID-Positive
08:01 GMT'Omnibus of Omnishambles': Boris Johnson Facing SNP Motion of Censure in Parliament
07:41 GMTKeane & Carragher Engage in War of Words Over Cristiano Ronaldo's Place in Man Utd's Starting XI
07:40 GMTNetizens Split as Indian Comedian Munawar Faruqui Hints at Quitting Stand-up
07:13 GMTFiji Dispatches Troops to Honiara as Solomon Islands Announces State of Public Emergency Until March
07:04 GMTRosneft CEO: Russia-China Trade Turnover Creates Great Potential for Payments in Yuan and Rubles
06:52 GMTTrump Wanted to Keep Bagram Base Under US Control After Afghan Withdrawal 'Because of China'
06:51 GMTSocialist Xiomara Castro Leads in Honduran Presidential Race
06:36 GMTThird of Swedish Police in Blighted Areas Have Mental Issues – Survey
06:27 GMTFormer US Defence Chief Mark Esper Sues Pentagon for 'Blocking' Parts of His Memoir
06:09 GMTPriti Patel to Hold Talks on Migration Crisis With European Ministers Despite French Snub
06:00 GMTKnow-How: Who Actually Made Scythian 'Gold'
05:59 GMTDenmark Bans Influencers From Advertising Cosmetic Surgery, Sugar Dating to Minors
05:51 GMTUK Convenes Urgent G7 Ministerial Meeting Over COVID Variant Omicron as WHO Urges Not to Panic
05:07 GMTMass Killer Breivik Sending Letters to Survivors With Excerpts From His Manifesto
04:47 GMTCOVID Live Updates: WHO Says Omicron Variant is Likely to Further Spread at Global Level
03:46 GMTVideo: Jacksonville Jaguars Mascot Risks it All in Failed Stunt, Still Unable to Bring Luck to Team
03:39 GMTGOP Lawmaker Says Biden’s Social Spending Plan Would Allow IRS to 'Spy' on Americans
02:53 GMTMaduro Calls EU Observers at Latest Venezuelan Elections ‘Delegation of Spies’
02:43 GMT'Keep Livin': Matthew McConaughey Decides Not to Run for Texas Governor