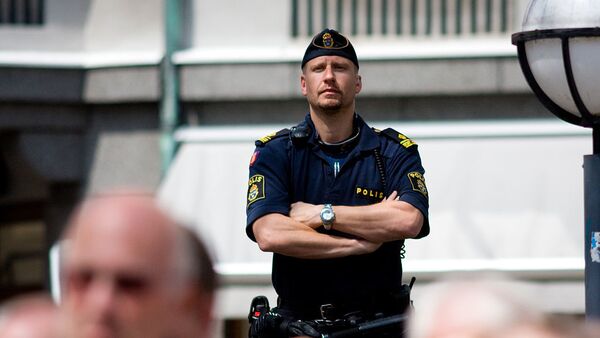 CC BY 2.0 / Håkan Dahlström / A police officer in Helsingborg (Sweden)
Subscribe
International
India
Africa
Despite the number of shootings going up, the Swedish police are patting themselves on the back for having reduced deadly violence.

The number of shootings is increasing in Sweden, despite a national effort to curtail gang violence amid the ongoing coronavirus epidemic, SVT reported.

While a total of 15 people have been shot dead in the country of over 10 million between 1 January and 15 April this year, which is fully comparable with the corresponding period last year, the overall number of shootings and injuries, at 86 and 32 respectively, has increased.

This adverse trend continues despite a national crackdown on gang violence, “Operation Hoarfrost” being underway. Its stated goal is to reduce gangland violence by putting criminal gangs under pressure.

“I can say with certainty that we have prevented serious violent crimes, so I say that we have reduced the deadly violence,” Stefan Hector, national commander of Operation Hoarfrost, told SVT.

During Operation Hoarfrost, which critics dubbed Operation Snowflake, the police conducted hundreds of house searches, seizing 545 weapons, 100 kilogrammes of explosives, SEK 2.3 million in cash (about $200,000) and arresting over 200 people for various crimes.

The police also noted that the raging coronavirus epidemic, contrary to some people's expectations, has not had a major impact on crime. This is likely due to the fact that Sweden, unlike most European nations, has consistently avoided lockdowns. Even the flow of drugs has not been disturbed to any great extent, the police said. However, there is still a risk that reduced access to drugs may increase violence.

“We have seen a tendency that in cases where the supply of drugs has decreased, we have begun to witness extortion as a method of getting money into the criminal environment. And this is usually carried out through violence,” Stefan Hector said.

The ongoing pandemic has left Sweden the most-affected Scandinavian nation, with nearly 19,000 confirmed cases of COVID-19 and nearly 2,300 deaths.

In recent years, bombings and shootings have regularly disrupted the country's largest cities, such as Stockholm, Gothenburg and Malmö, so much so that locals have become accustomed to it. Even Swedish Police Chief Anders Thornberg called the gangland violence “the new normal” and told his compatriots to “get used to it”. According to him, the deadly shootings are closely related to drug trafficking.

A 2018 study suggested that the risk of becoming the victim of firearm violence has increased five-fold since 1996, which has been blamed on too little crime prevention work. The same study concluded that the extent firearm violence in Sweden is ten times larger than in Germany.