SAS to Lay Off 5,000 Employees Due to 'Unprecedented' Coronavirus Pandemic Reality 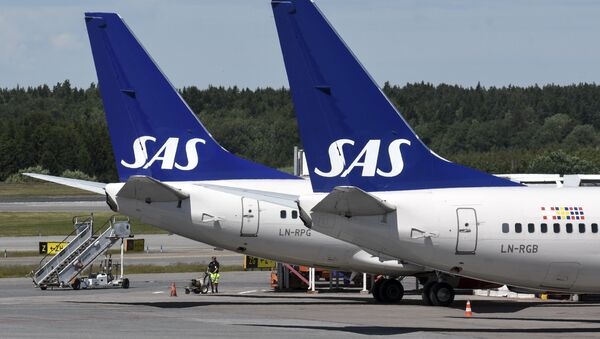 © AFP 2021 / Johan NILSSON / TT News Agency
Subscribe
Following the onslaught of the coronavirus, Scandinavia's largest airline has gone from 180 aircraft servicing 90 destinations to only “a very limited domestic network in Norway and Sweden”.

Scandinavian Airlines (SAS) said on Tuesday it would reduce its workforce by as many as 5,000 full-time positions, due to the COVID-19 pandemic and its impact on air traffic in the form of travel restrictions and cancelled fights.

“COVID-19 has forced SAS to face a new and unprecedented reality that will reverberate not only in the coming months, but also during the coming years,” SAS CEO Rickard Gustafson said in a press release.

According to Gustafson, the company retains its ambition to be “the leading airline in Scandinavia and to have a leading role in the Scandinavian infrastructure as a guarantor of national and international connectivity”.

“In order to continue this important societal function, we need to adapt our cost base to the prevailing circumstances,” he noted, promising to work intensively with trade union representatives and others to “identify solutions so that as few people as possible are affected”.

Lastly, he promised to “remain ready to quickly ramp-up operations and reduce the number of affected positions if demand recovers more quickly”.

In the current framework of restrictions, Scandinavia's largest airline said it only expected limited activity during the key summer season.

“In addition, it will most likely take some years before demand returns to the levels seen before COVID-19,” SAS said.

SAS CEO Rickard Gustafson credited government help, such as for example Sweden's state support for furloughed workers. Sweden and Denmark, SAS' two largest shareholders, announced on March 17th they would provide more than 275 million euros in credit guarantees to protect SAS from the economic impact of the crisis. Nevertheless, Gustafson said SAS needed to look to the future and prepare to adjust its workforce to reduced demand in the wake of the pandemic.

“COVID-19 has created a global crisis for society at large and for the airline industry in particular,” Gustafson said.

Since the onslaught of the coronavirus pandemic in March, which brought international travel to a near-total standstill, SAS has temporarily laid off most of its staff as both overseas and domestic travel has been severely impacted. As of today, the airline operates only “a very limited domestic network in Norway and Sweden”.

Scandinavian Airlines, usually known as SAS, is the flag carrier of Denmark, Norway and Sweden. Headquartered in Solna, Sweden, the airline used to operate 180 aircraft to 90 destinations, with its main hubs being Copenhagen-Kastrup Airport, Stockholm-Arlanda Airport and Oslo Airport, Gardermoen.

000000
Popular comments
In fact, this disgusting globalist airline started plummeting before COVID-19 was ever heard of. We have not forgotten that appalling commercial in which this repugnant airline claimed that Swedes have never invented anything, didn't have a culture of their own, and as a nation was a parasite of other cultures. No sympathy at all........ and THAT is the reality.

keyboardcosmetics
28 April 2020, 15:21 GMT3
000000
Funny how you never hear about the huge profits that are made off the consumer's and now they want us to feel sorry for them losing money, not.