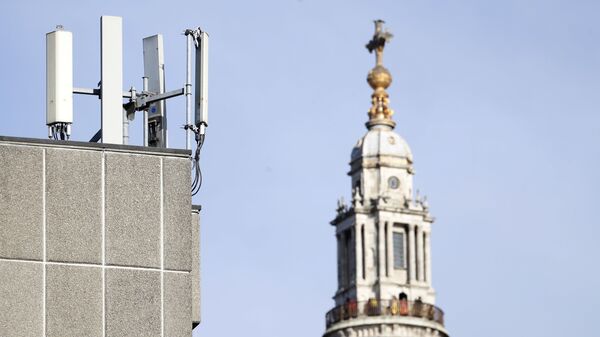 Tim Korso
All materials
An array of conspiracy theories linking the roll-out of the cutting-edge telecommunications technology with the coronavirus pandemic has recently been spreading online, despite efforts by both governments and tech giants to stop the dissemination of false information about the disease.

The identity of a mysterious "former Vodafone boss", the author of a 5G and coronavirus-related theory that went viral, has been revealed by a joint investigation of the fact-checking startup Logically and The Guardian. Their collaboration revealed that the voice in an audio recording, which was first published on YouTube on 28 March but later spread across the Internet, belonged to UK Pastor Jonathon James of Light City Christian Ministries.

In the audio recording, Jonathon James, who confirmed to The Guardian that he had made it, however, presents himself as a former "head of the largest business unit at Vodafone". His LinkedIn profile indicates that he worked as a "Large Enterprise Acquisition Sector Head" at Vodafone between 2014 and 2015, but the company told Logically that the pastor had held "a relatively junior sales position in 2014", which he left "following sub-par performance" a year later - before the company started considering deploying 5G networks in the UK.

The pastor claimed in the recording, citing his alleged deep experience in the telecommunications industry, that 5G waves have a harmful impact on the human body, despite numerous watchdogs confirming the technology's safety. In addition, Jonathon James claimed that the disease and deaths caused by the coronavirus infection were the result of 5G's influence.

He went on to claim that the global pandemic is nothing more than a "cover-up" devised to hide the harmfulness of 5G and in order to justify mass vaccinations with chips - another popular conspiracy theory that has existed since the 1990s, but never received any credible proof.

When contacted by The Guardian, James claimed that the recording was "[a] somewhat private message to a dedicated small community". He also insisted that the message was not supposed to go viral, despite the fact that he actually called on his listeners to share the recording with people they know.

"I certainly wasn’t trying to vilify, incriminate or implicate any Mobile Network Operator for their commercial endeavours [...] Had I known my voice note would have gone to a wider audience I certainly would have contextualised my thoughts, been more specific on what I was sharing citing references, and far less explicit", the pastor said.

The theories expressed by the pastor are just a handful out of a multitude that try to link the cutting-edge telecom technology with the pandemic, despite health authorities, including in the UK, and tech giants doing their best to dispel such conspiracy theories and countering them with data about both 5G and COVID-19.

Such theories have already led to a series of acts of vandalism, such as arsons, in the UK, which has resulted in severe damage to telecommunications equipment - albeit in some cases not necessarily linked to the 5G rollout. In light of these events, British authorities have called on people not to trust such claims about 5G, calling them "fake" and outright "dangerous".