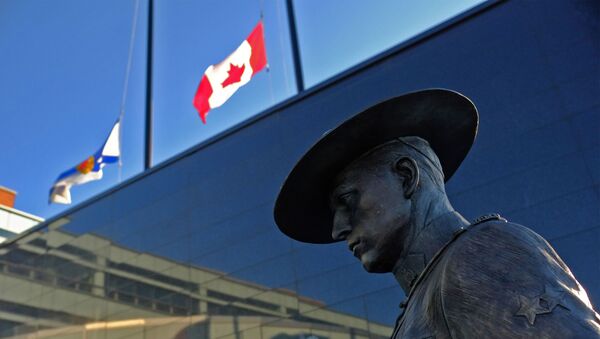 © AFP 2021 / TIM KROCHAK
Subscribe
Sixteen people were shot dead by a gunman in the eastern province of Nova Scotia, the worst mass shooting in Canada’s history. Sputnik looks at some of the grisliest massacres in the annals of Canadian crime.

Gabriel Wortman, 51, was shot dead by police officers at a truck stop near Enfield, Nova Scotia on Sunday, 19 April, after a 12-hour manhunt.

Heidi Stevenson, a 23-year veteran with the Royal Canadian Mounted Police - better known as the Mounties - was among those gunned down by Wortman, a denture maker, who started firing shots in Portapique, 60 miles from Nova Scotia’s main city, Halifax.

​Gun violence in Canada is much less common than in the neighbouring United States, and weapons are more strictly controlled, but this is not the first mass shooting in the country’s history.

Prior to Sunday’s shooting, the worst massacre in Canada’s history took place in Montreal on 6 December 1989.

Marc Lepine, 25, arrived at the École Polytechnique in Montréal armed with a semi-automatic assault rifle and determined to wreak vengeance amid a twisted sense of injustice.

Lepine - who was born Gamil Gharbi to an Algerian immigrant who married a French-Canadian nurse - had a difficult childhood and teenage years and grew to loathe his sister, who teased him incessantly for his chronic acne and lack of success with girls.

Having been rejected by the Canadian armed forces and sacked from a job in a hospital, Lepine began to nurse an irrational hatred of feminists.

In April 1989 he met with a university admissions officer and told him he felt women were taking over jobs from men and should stay at home and have babies - a belief he shared with Timothy McVeigh.

Eight months later, after weeks of plotting, he embarked on the attack, a three-page suicide letter in his pocket.

Lepine, armed to the teeth, entered a classroom at the École Polytechnique, told the 50 male engineering students to leave and then shot dead six female students, and injured three others. He then stalked the building picking out targets.

In total 14 women were killed and 10 were injured before Lepine finally turned the gun on himself.

His suicide letter, a long rant against feminism, was later published in La Presse newspaper.

Although only one person - Corporal Nathan Cirillo - was killed during the attack on Canada’s federal parliament building in Ottawa in October 2014, the incident had a huge effect on the Canadian psyche.

It was the first jihadist terrorist attack on Canada and exposed serious security weaknesses at Parliament Hill, where the then Prime Minister Stephen Harper and many MPs, including Justin Trudeau, were in session.

The perpetrator was Michael Zehaf-Bibeau, 32, a homeless drug addict whose father had fought against Muammar Gaddafi in the Libyan civil war.

It is still unclear how Zehaf-Bibeau got hold of a gun but he shot Corporal Cirillo, 24, at the National War Memorial before forcing his way inside the parliament building.

As he made his way towards the prime minister and his MPs, Kevin Vickers, the House of Commons sergeant-at-arms, pulled out his personal protection sidearm and exchanged fire with Zehaf-Bibeau as they took cover behind pillars.

Vickers was praised by MPs after he shot Zehaf-Bibeau dead and a video later emerged in which the gunman expressed his wish to "kill some soldiers" in Canada if he could not get his wish to move to Syria and join Daesh*.

Canada is not a violent society but when there is violence it is quite often associated with the country’s biker gangs.

On 8 April 2006 police found eight bodies dumped in three cars and a tow truck in a field near the town of Shedden, halfway between Toronto and Detroit.

Shedden, whose only previous claim to fame was as the Rhubarb Capital of Ontario, was an unlikely venue for a massacre but it turned out that the killings were linked to an internecine feud within the Toronto chapter of the Bandidos, one of the world’s biggest biker gangs.

#novascotiastrong
My deepest and sincerest thoughts are going out to my former #coleharbourhigh teacher as he mourns the death of his wife, Nova Scotias hero CST Heidi Stevenson. May you rest in peace as well as dont let us forget the other 17. One of who was a elem teacher. 💔 pic.twitter.com/B2LRrggQ28

​Wayne Kellestine and five other men were jailed for life for the killings.

The victims were lured to their deaths in Kellestine’s barn, after being told they would meet to settle their grievances.

One of the victims, John ‘Boxer’ Muscedere, told his killers: "Do me. Do me first. I want to go out like a man."

When detectives arrived at the barn they found blood and pieces of flesh amid beer bottles and Confederate and Nazi flags.

On the morning of 10 August 2018 Matthew Raymond started firing shots from an apartment building in Fredericton, New Brunswick.

Raymond, 49, was charged with four counts of first-degree murder but his trial has been delayed by numerous tests to see if he is mentally well enough to communicate with lawyers.

Last month a jury was due to decide whether Raymond’s mental illness prevented him from communicating with his lawyer but then the coronavirus crisis hit Canada and the hearing was postponed indefinitely.

In the 1990s the infamous Hells Angels biker gang became involved in a long and brutal war in Quebec with a French-Canadian gang, known as the Rock Machine.

But the Rock Machine had not even been formed when the Lennoxville Massacre took place at a clubhouse in Sherbrooke, Quebec.

Two Hells Angels chapters in Montreal had been feuding for several months and on 24 March 1985 Laurent “The Englishman” Viau, Michele “Mad Willie” Mayrand, Guy-Louis “Pork Chop” Adams, Jean-Guy Geoffrion and Jean-Pierre Mathieu were shot and beaten to death by 15 assassins.

The main target - Yves Trudeau, who went by the nickname Apache, survived because he had just booked into drug rehab.

Four of the killers - Robert “Snake” Tremblay, Luc “Scary Sam” Michaud, Rejean “Zig Zag” Lessard, and Harold Pelletiere, were jailed but have since been released.

In the summer of 2019 Canada was gripped by a manhunt in the wilds of northern Manitoba.

Kam McLeod, 19, and Bryer Schmegelsky, 18, went on the run on 19 July after shooting dead University of British Columbia professor Leonard Dyck, 64, and a couple, Lucas Fowler, 23, and Chynna Deese, 24.

They stole a Toyota RAV4 car and drove 2,000 miles, before dumping it near the town of Gillam in a remote corner of Manitoba on 23 July.

A huge manhunt was launched by the Mounties and people living in the remote countryside feared for their lives.

Finally, on 8 August, police revealed that the pair’s bodies had been found in woodland five miles from where the car had been dumped. They had committed suicide.

The pair’s motivation was never made clear but a photograph of Schmegelsky wearing a Nazi armband emerged on the internet.

In 1984 three employees of the Quebec government - Camille Lepage, George Boyer and Roger Lefrançois - were shot dead in the National Assembly building.

Denis Lortie, a soldier who suffered from paranoid schizophrenia, shouted: “'I came here to kill” as he entered the building in Quebec City.

Corporal Lortie, 38, then held the assembly’s sergeant-at-arms, René Marc Jalbert, hostage for almost five hours as he spoke to negotiators over the phone.

A special commando team then stormed the building and overpowered Lortie, who was armed with a submachine gun, two handguns and a hunting knife.

In a tape recording he handed into a radio station before embarking on the attack, Lortie said: “No one will be able to stop me - not the police, not the army - because I am going to carry out a destruction and then I will destroy myself. 'It will be a first in Canada.''

Lortie was jailed for second-degree murder but was released on parole in 1996, having served just 12 years.

On 23 April 2018 Alek Minassian drove a van into crowds of shoppers in downtown Toronto, killing 10 and injuring at least 16 people.

​Initially it was suspected the attacker was a jihadist terrorist as the incident had echoes of similar attacks in Britain and France.

But it later emerged that Minassian, 25, was a misogynistic software developer who had posted messages on the 4Chan message board expressing his hatred of women.

Minassian identified as an incel - an involuntary celibate - and posted a rambling manifesto on 4Chan.

He wrote: “The Incel Rebellion has already begun! We will overthrow all the Chads and Stacys! All hail the Supreme Gentleman Elliot Rodger!”

Elliot Rodger killed six people in a stabbing and shooting spree in Isla Vista, California, in May 2014 after posting a video clip on YouTube in which he expressed his sexual frustration and hatred of women.

Incels are an online community who often blame women for their inability to have sex or form relationships.

Minassian is due to go on trial later this year.

000000
Popular comments
A dirty Christian fundamentalist terrorist. Ban the Bible. These snow-niggers who are still living in their 0 century mindset are a scourge of civilised society. As soon as I read the headline, I just knew the race and religion of this crazy zealot.

The_Man
20 April 2020, 16:31 GMT1
000000
The moronic "jihadi" attack of 2014 was a staged fkn joke of a false flag. Note to canadian buffoons (taking direction from anglo-american clowns) - Don't rush your pathetic, fake "terrorist attacks" just to make the six pm msm news cycle. These canadian idiots even had the proper "legislation" ready to go in record time. What a fkn ridiculous clown show.