Netanyahu ‘Knows the Game Better’ Than Gantz, Won’t Give Up PM Seat Without Election 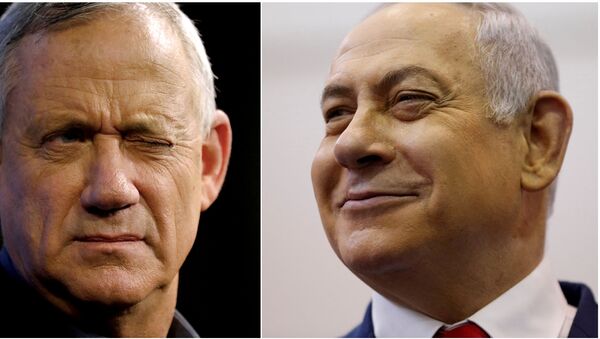 With talks toward the formation of a coalition government extended until midnight Wednesday, Israeli Prime Minister Benjamin Netanyahu and Israel Resilience Party leader Benny Gantz are conducting negotiations that one expert argues will likely set the incumbent up for continued success while also denying Gantz the position in the future.

Miko Peled, the author of “The General’s Son: The Journey of an Israeli in Palestine” and "Injustice: The Story of the Holy Land Foundation Five,” joined Radio Sputnik’s Loud and Clear on Tuesday to discuss the ongoing negotiations between the two politicians and detail why Gantz refused to form his own government.

Peled told hosts Brian Becker and John Kiriakou that when it comes to Israeli politics, there are two things to keep in mind - with the first being that Netanyahu is not going anywhere.

“He has amassed an enormous amount of influence over the 10 years that he’s been prime minister, and even before that, as a major player in Israeli politics. Nobody knows the game better than he does. Nobody is as dirty and sneaky and lacks principles like him,” he argued.

The second point to keep in mind, according to Peled, is the fact that the Blue and White Alliance’s Gantz rejected the option of becoming prime minister and creating a minority government because he did not want the “stain” of relying on the Joint List.

Peled pointed out that many Israelis feel as if the Palestinians and the Joint List are “terror-supporting, fifth column Arabs.” Furthermore, he argued that Gantz knew that “had he done that, his life would’ve been absolutely miserable.”

Though Gantz passed up his opportunity to be Israel’s head of government, Netanyahu’s offer allowed him to negotiate with people familiar to him.

At the same time, the current Israeli prime minister is more than likely plotting a way to ensure that Gantz never holds that office, Peled said. He explained that one clause Netanyahu is pushing for during the coalition talks would require a general election to take place if he were removed from office, rather than Gantz automatically becoming prime minister.

Prior to the extension granted by Israeli President Reuven Rivlin to Gantz, the original deadline for a decision was Monday at midnight. The rush to form a unity government has been attributed to the ongoing COVID-19 coronavirus crisis facing the country, which has resulted in a total of 12,046 confirmed cases of the virus and 123 related deaths, according to the Johns Hopkins University COVID-19 dashboard.

Peled highlighted that no one has bothered to bring up the fact that, as has been the case for decades, “2 million Palestinians [are] living 30 minutes away from Tel Aviv in a concentration camp with no access to water, no access to medicine, no access to travel, no access to nutrition and [are] being bombed on a regular basis.”