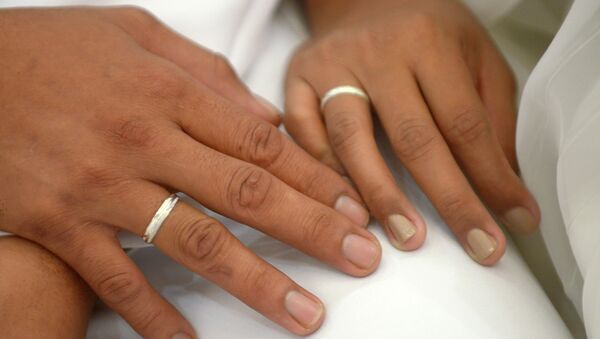 New Delhi (Sputnik): The 21-day countrywide lockdown has brought India to a standstill. However, some are finding it too much to put up with. The government has imposed strict restrictions to prevent people from stepping out of their homes without reason.

A Muslim bridegroom in India’s Uttar Pradesh state did not imagine that he would be spending time in a police station with his family instead of secretly reaching his bride’s place at night, outsmarting authorities amid the COVID-19 national lockdown.

The incident occurred in the state’s Ghaziabad district, where seven people, including the bridegroom, were arrested for violating lockdown orders, police said on Monday.

The accused were headed for Meerut city in a car at midnight, but were flagged down at a police checkpoint.

"Initially they tried to fool us. But later they confessed to be heading for a wedding and chose midnight to escape the checking", said a senior police officer.

During police questioning, they revealed that they could not procure permission from the authorities for the wedding. Thus, they planned to carry out the "Nikah" (Muslim wedding) and bring the bride back to their home during the same night.

"We have been making several requests but people are not listening to us. The authorities will have to go a little hard on them. Carrying our functions and celebrations is not ideal at this pandemic time", the officer added.

Police across the country have been keeping an eye on any congregation at religious shrines or halls. In some cases, people have pelted stones and even attacked cops who have tried to stop them from gathering.