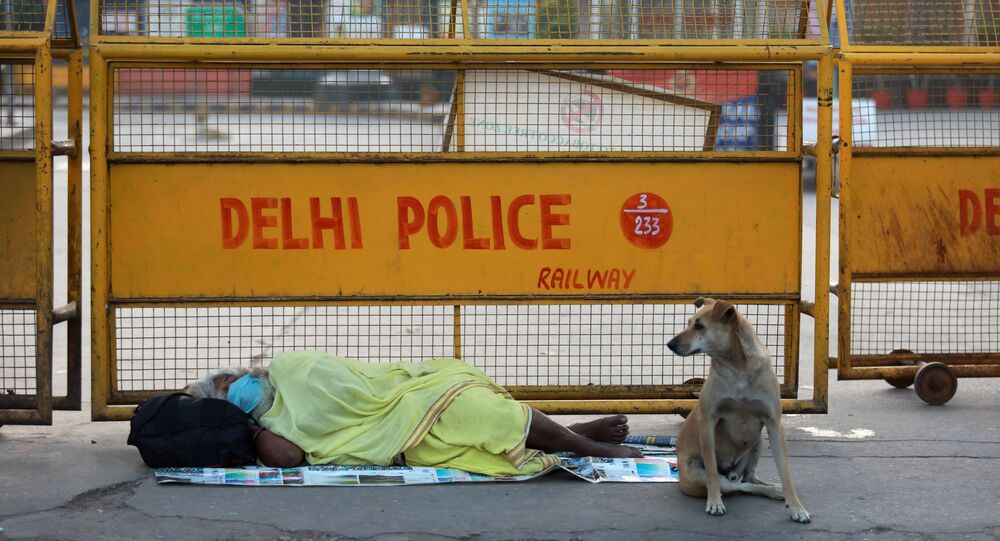 New Delhi (Sputnik): While announcing 21-day lockdown on 24 March, Indian Prime Minister Narendra Modi warned that the economic impact of this crisis would be unimaginable but priority must be given to human lives during this pandemic.

Indian finance minister Nirmala Sitharaman has announced a major stimulus package for the poor and daily wagers who have lost their jobs.

While briefing the media on Thursday, Sitharaman said that the government has finalised a package worth around $22.36 billion for migrant workers, women and the poor.

“We have responded and reached out to the poorest of the poor. Package will ensure food and money for the poor people affected by lockdown,” she emphasised.

The government will provide five kilograms of either rice or wheat per person for the next three months. Sitharaman has also announced $66,000 insurance cover to "frontline warriors" of Covid-19 like nurses, paramedics and sanitation workers.

“The insurance cover to be in force for the next three months, by then the impact of virus is likely to subside,” said the minister, which also indicates that the government has prepared a 100 days emergency plan to fight the pandemic as well.

The government has also promised to pay the employees’ provident fund (EPF) contribution of both employers and employees for the next three months so that “no one suffers or due to loss of continuity of the EPF contribution”. This contribution to EPF – a scheme that helps people save for retirement – is for companies with less than 100 employees and where 90 percent of the staff draw less than INR 15,000 ($200) per month.

For people over 60, $13 per month will be given in two instalments until May year. The minister claimed that 30 million poor senior citizens, widows and handicapped will benefit from the scheme.

In the time when the entire banking system is under pressure due to bad loans, the government has doubled the amount of collateral free loans to women's self-help groups. The minister said that around six million self-help groups can raise loans of up to $26,530 from the current $1,3265.

Earlier this week, Sitharaman announced a number of relaxations on tax payment deadlines, insolvency, and banking charges to minimise the impact of COVID-19 on the economy.

The government has enforced a nationwide lockdown as the number of coronavirus cases have been increasing rapidly. The health ministry has confirmed over 640 active coronavirus cases in the country and 13 deaths.