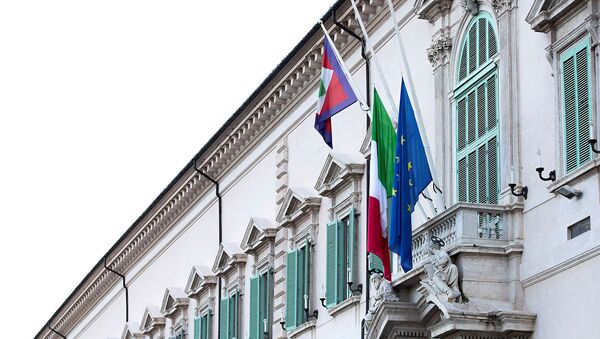 © REUTERS / ITALIAN PRESIDENCY
Subscribe
As Europe has become the epicentre of the coronavirus epidemic, with almost 700,000 confirmed cases, and Italy particularly hard-hit, the pandemic has become a stress-test for EU unity, as stark differences have thwarted an agreement on more support for coronavirus-hit economies, with talks suspended.

According to Conte, the EU must “rise to the challenge” of what he referred to as "the biggest test since the Second World War" and take concerted efforts to extend much-needed aid to the countries that were worst hit by the spread of the COVID-19 respiratory virus.

The Italian Prime Minister insisted that Europe's leaders were "facing an appointment with history".

"If we do not seize the opportunity to put new life into the European project, the risk of failure is real," said Conte.

As the infection rate in Italy shows signs of decelerating, and the death toll gradually starting to diminish, Giuseppe Conte warned viewers  against lowering their guard and emphasised that the national lockdown could only be eased slowly. 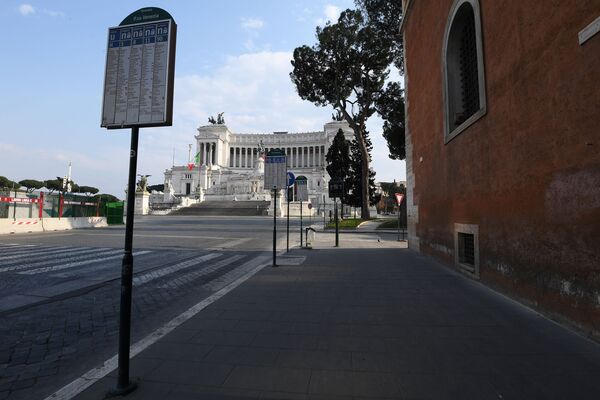 Piazza Venezia in Rome is seen deserted as Italians stay home as part of a lockdown against the spread of coronavirus disease (COVID-19) in Rome, Italy March 22, 202
© REUTERS / ALBERTO LINGRIA

"We need to pick sectors that can restart their activity. If scientists confirm it, we might begin to relax some measures already by the end of this month," said Conte, whose approval rating has surged from 46 percent to 71 percent according to a recent poll by Demos.

While winning kudos for his government's handling of the COVID-19 crisis, critics of the prime minister find fault with his procrastination over introducing restrictions in the first few days of the outbreak in the country and the subsequently lax lockdown.

Defending his actions at the time, Conte said:

"Going back, I would do the same. We have a completely different system to China. For us to severely limit constitutional freedoms was a critical decision that we had to consider very carefully. If I had suggested a lockdown or limits on constitutional rights at the start, when there were the first clusters, people would have taken me for a madman."

While Italy has insisted that the large number of tests carried out in the country is one of the reasons why its number of COVID-19 cases is so high, Conte compared testing in some other countries to "coping with the situation in the dark".

Britain, according to the BBC, is now averaging around 14,000 tests daily, with Italy's testing level is around double that number.

When questioned on aid that has been extended to Italy by a number of countries, including Russia, Giuseppe Conte dismissed speculations that certain conditions had possibly been attached, such as the Italian government supporting lifting EU sanctions on Moscow.

"The mere insinuation offends me deeply… It's an offence to the Italian government… and also to Vladimir Putin, who would never dream of using this as leverage."

Underscoring that the coronavirus outbreak will result in the economy contracting by more than 11 percent, the Prime Minister called it an "economic and social emergency" that is testing the financial structure of each nation.

"I feel the pain of the gaping wound that this nation is experiencing… Behind the numbers are names and surnames, life stories and broken families. The Italian nation is suffering," said Conte.

Giuseppe Conte gave his first interview for UK broadcast media since the pandemic gripped Italy as Italy and some other EU countries have been pushing for the issuing of so-called "corona bonds", amidst strong opposition from The Netherlands, in particular. 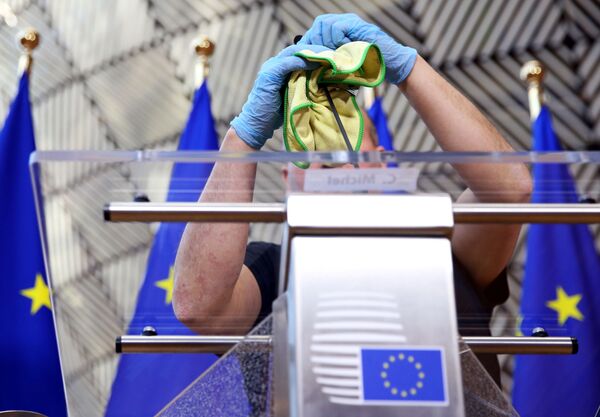 A man disinfects a desk before a news conference of European Council President Charles Michel after after EU heads of state held a videoconference to discuss measures for the coronavirus disease (COVID-19) in Brussels, Belgium, March 26, 2020.
© REUTERS / FRANCOIS WALSCHAERTS

Earlier, all-night video conference talks between the 19 finance ministers of the eurozone on a coronavirus economic rescue plan worth around €540bn (£476bn) failed to strike a deal amid differences over conditions that should be attached to credit issued by the eurozone bailout fund, the European Stability Mechanism, reported France24.

After 16h of discussions we came close to a deal but we are not there yet.
I suspended the #Eurogroup & continue tomorrow, thu.
My goal remains: A strong EU safety net against fallout of #covid19 (to shield workers, firms &countries)& commit/ to a sizeable recovery plan pic.twitter.com/kGHoURgdrv

​Suspended on 8 April, the talks are set to resume Thursday, as ministers of France and Germany issued a joint appeal on Twitter urging European states to “rise to the challenges” of the current reality.

“We call on all European states to rise to the exceptional challenges and to reach an agreement,” wrote France’s Bruno Le Maire.

​Previously, in a letter on 25 March, the leaders of nine European Union states, including France, Spain, and Italy called for a common debt instrument to combat COVID-19.

Addressed to European Council President Charles Michel, the letter underscored the necessity of working on such an instrument “issued by a European institution to raise funds on the market.”

The news comes as the COVID-19 outbreak in northern Italy is slowly receding.

"A tsunami that struck northern Italy is gradually receding. And the ban on movement prevented it from spreading south,” while adding that people must still be careful and responsible.

Northern Italy, namely the region of Lombardy, had become the epicentre of the nation's outbreak, recording the highest numbers of COVID-19 cases.

In a bid to curb the pandemic, Italy has been on a nationwide lockdown since early March.

Despite its best efforts, the country has the highest death toll in the world, which currently exceeds 17,600, according to the Johns Hopkins University data, with the total number of those infected surpasses 139,000.