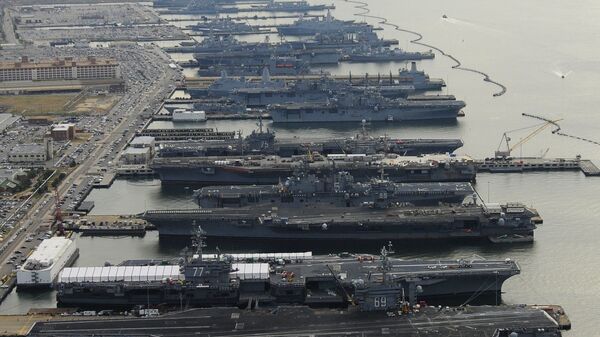 A fourth US aircraft carrier now has cases of COVID-19 among its crew. The USS Nimitz was preparing to deploy later this month for sea trials and had already begun bringing crew aboard.

Based in Bremerton, Washington, the Nimitz began embarking some of her crew in recent weeks in an effort to segregate them from the general population prior to her putting to sea, but despite the best efforts of Navy brass, a crew member aboard the ship has tested positive for the COVID-19 novel coronavirus, Politico reported on Tuesday, citing three officials familiar with the matter.

A second member of the Nimitz’s crew has also tested positive, but they had not yet been aboard the warship.

According to the Washington Post, the Navy relied on temperature checks and screenings that included verbal questioning about symptoms when embarking crew onto the Nimitz, but no tests were given out.

The father of a sailor in the crew told the Post his son was worried about how naval officials were reacting to the situation.

“I think he’s pretty worried. He feels like they’re not taking it serious,” the father said. “It’s how the chiefs are handling it, and the fact that there are cases on board and they’re still thinking of pulling out.”

This brings the total number of US Navy aircraft carriers with COVID-19 cases aboard to four.

The USS Theodore Roosevelt, underway in the Philippine Sea when cases were first detected, has since put into port in Guam and moved most of the crew to shore quarantine, while more than 200 sailors had tested positive by Tuesday. The other carriers with infected crew members are the USS Ronald Reagan, in port for retrofit in Yokosuka, Japan, and the USS Carl Vinson, which is also in port in Bremerton, where it has just finished a years’ worth of repairs.

The 11 nuclear-powered Nimitz-class aircraft carriers form the core of the US Navy’s blue-water fleet, towering over other warships at 100,000 tons of displacement and carrying 80 aircraft and more than 4,000 crew.

The cramped conditions in which crew members live and work makes the kind of social distancing advised by the Trump administration and health officials an impossibility - to say nothing of quarantining potentially infected persons for two weeks at a time.

Anxieties about the potential for the highly infectious virus to sweep through the Roosevelt’s crew prompted its former commander, Capt. Brett Crozier, to pen a letter to Navy leaders begging for support in keeping his crew safe. Fallout from the note, which was leaked to the press, eventually led to both Crozier’s ouster for writing the letter and to the resignation of former acting US Navy Secretary Thomas Modly for his furious denunciation of Crozier’s actions afterward.

However, the US Navy isn’t the only fleet struggling with COVID-19 cases at sea: the French Navy’s flagship, the aircraft carrier Charles de Gaulle, is also returning to port after 40 crew members started showing symptoms of COVID-19, according French news station BFMTV. Much smaller than the Nimitz-class ships, the de Gaulle has a crew of only 1,760.