COVID-19: Blessing in Disguise For India's Political Parties as They Deploy Workers on Ground? 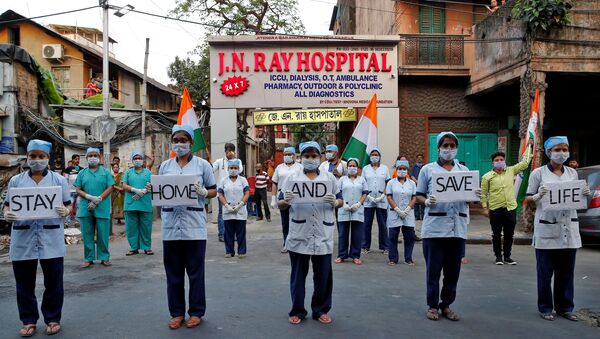 © REUTERS / RUPAK DE CHOWDHURI
Subscribe
New Delhi (Sputnik): India's political parties are increasing their physical presence, with hundreds of party workers engaged in the distribution of COVID-19 relief materials to the poor. But will this worker mobilisation yield political and electoral benefits?

Denying that political parties would reap benefit as a result of the relief efforts undertaken by party workers that could eventually be transformed into electoral rewards, political analyst Nilanjan Mukhopadhyay notes that electoral gains or losses are going to be built by the larger narrative which Indian Prime Minister Narendra Modi, and BJP, have been able to present to people.

“There is a very subliminal Hindutva campaign and it becomes very overt when Tablighi Jamaat comes up. This has given a huge opportunity to the BJP to convert [the] entire COVID experience into yet another episode of Islamophobia,” Mukhopadhyay said.

A major chunk of COVID-19 cases in India, 30 percent as mentioned by the Indian health ministry, have resulted from the gathering of the Islamic missionary group Tablighi Jamaat at an event in Delhi in mid-March, in which over 1,800 people from 41 countries participated. Most of these people were later traced and found to be positive for Coronavirus.

Yet another important narrative that is likely to affect the outcome of elections is rationality, according to the analyst.

“Has BJP and Modi has been able to convince people to keep rationality out of the framework? …You have activities like banging plate and lighting diyas (lamps). These keep people engaged.”

Political parties are actively engaging in an on-the-ground relief operation to slow the spread of COVID-19, with a mass deployment of party workers. While this is the need of the hour, parties face criticism for pushing ulterior motives and vested interests in such critical times through these relief campaigns.

While India’s ruling Bharatiya Janata Party (BJP) distributed food relief kits with Modi’s picture and name on it, the youth wing of India’s main opposition party Congress began a similar initiative with a picture of ex-party chief Rahul Gandhi on the bags.

This is really disappointing to see when world fighting with pandemic crisis #covid19 and Congress as always never miss the chance to promote their party. Now they have launch Rahul Gandhi’s relief kit. https://t.co/ejg0U8xeMr

Shameless vultures. This not BJP Cash but each and every Indian contibuted, through direct taxes & indirect taxes

​Expressing his scepticism about the capacity of political parties to reach out to people, Mukhopadhyay pointed out that “political parties have always used opportunities to put the face of the leader on top. At the end of it, it's less of a food packet, more of a handbill. It is publicity material.”

Political party eagerness to engage with workers and voters during times of crisis is evident as party leaders such as the Samajwadi Party chief and former head of India’s Uttar Pradesh state, Akhilesh Yadav, expressed interest in being part of the relief campaign, extending aid with the support of party workers who use bicycles to distribute food to poor people in villages. The bicycle is the party’s election symbol, and Uttar Pradesh will vote in 2022.

If the govt is willing to put aside political differences in these difficult times, Samajwadi Party workers can lend a helping hand using cycles to distribute food to the villages, especially to children who rely heavily on mid-day-meals for their daily nutrition. We are ready!

​India currently has 4778 positive COVID-19 cases and 136 dead from the pandemic. The country is under a 21-day complete lockdown implemented by the Indian government that came into effect midnight 24 March.