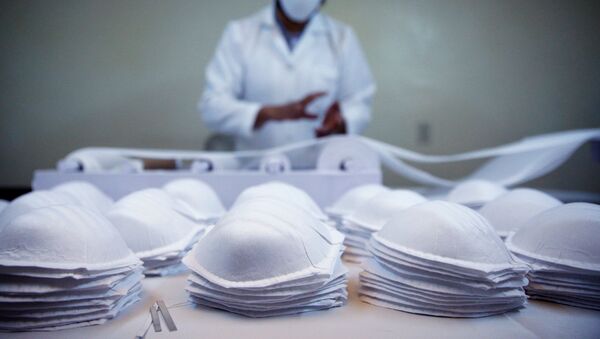 © REUTERS / DAVID MERCADO
Subscribe
TORONTO (Sputnik) - Canadian federal officials are aware of the reported hold-up of purchased medical protective masks and are in contact with US officials about the matter, Deputy Prime Minister Chrystia Freeland said during a daily briefing on the novel coronavirus (COVID-19) pandemic on Monday.

“We are very aware of the situation that [Canada’s the province of] Ontario experienced with some masks it had purchased in the United States and having some trouble getting them across the border,” Freeland said.

Freeland added that Canada’s ambassador to the United States is now in contact with US officials about the hold-up of the masks.

Earlier on Monday, Ontario Premier Doug Ford told a local outlet that a shipment of N95 masks destined for the province had been held up by US officials. Ford said Ontario is experiencing a critical shortage of personal protective equipment and reserves could be exhausted by the end of the week.

Later in the afternoon, in a daily COVID-19 briefing, Ford confirmed to reporters that a shipment of three million masks was seized by US officials, however, the latest reports, according to Ford, suggest that 500,000 masks have now been released and are on their way to Canada.

On Thursday, the Trump administration formally invoked the Defence Production Act to require 3M to prioritize orders from the US Federal Emergency Management Agency for N95 respirators, which will likely impact deliveries to Canada.