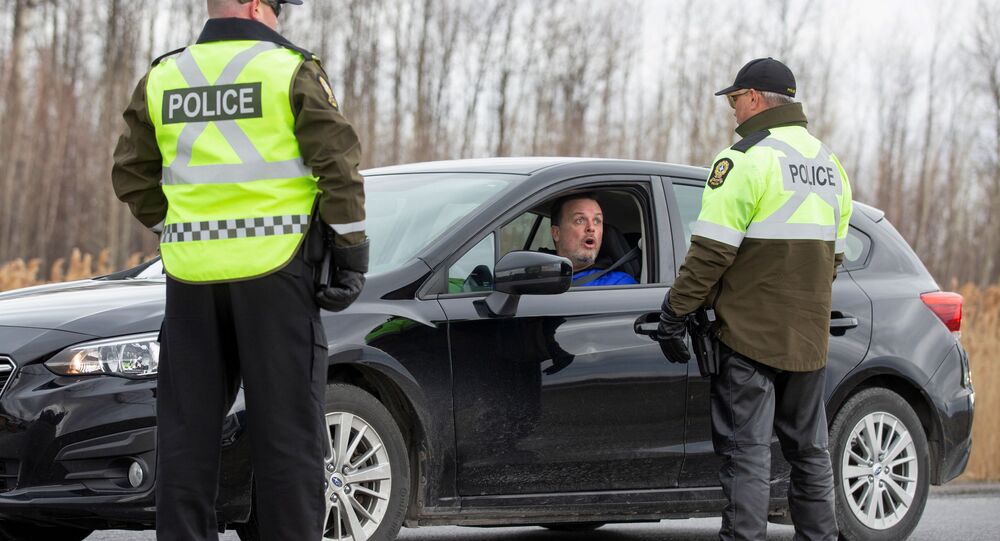 COVID-19 in Canada: Police at Quebec-Ontario Border, Temporary Ban on 'Irregular Crossings' from US

While Canada has confirmed only 12,400 cases of COVID-19 and 179 deaths from the disease, its southern neighbor the US is topping the world's coronavirus tally, with more than 275,500 infections and over 7,000 fatalities registered, the count by Johns Hopkins University shows.

Ottawa announced a temporary ban on illegal border crossings from the US, while Quebec authorities introduced their own quarantine measures by deploying police to provincial borders.

The Maple Leaf Nation is in the middle of the "biggest civic mobilisation since the Second World War". According to the country’s Prime Minister Justin Trudeau, who was the author of this claim, the federal government is planning to spend 275 million Canadian dollars on coronavirus research and medical countermeasures, allocating a total of more than $1 billion to a COVID-19 Response Fund.

"Canada was late to respond to incoming flights from China at the peak of the pandemic there. Trudeau was too driven by political correctness and not focused on protecting Canadian people. He did send 16 tons of personal protective equipment to China in February and now we're seeing the shortage of masks and protective gear here."

Canada's provinces have shown various degrees of independence from the federal government, sometimes practicing a "hands-on approach" in handling the crisis. Ontario's premier Doug Ford personally drove a truck to pick up 90,000 face masks from a local company that had donated the protective gear to the province's hospitals. Meanwhile, the authorities in neighboring Quebec decided to set up checkpoints at the borders with Ontario, with police officers having orders to hit motorists caught making "non-essential" trips with fines of up to $6,000.

See that guy? That’s Doug Ford, Premier. Dental Brands, a company in Markham, texted him to say they were donating 90,000 masks to hospitals in Ontario. Ford drove to their warehouse and loaded the masks onto his truck. Didn’t tell his staff. #onpoli ⁦@fordnation⁩ pic.twitter.com/yygtZNXVHf

What sounded like an April Fools' Day joke at first to many, suddenly became the new reality for thousands of people commuting between the two provinces.

This is so frustrating. I live closer to Quebec than I do to most of Ottawa. our downtown core is on the provincial border. It sets an uncomfortable precedent to have inter-provincial border control... especially in communities that exist cross-border https://t.co/9DSbkt3oGt

According to independent Canadian YouTuber Jill Colton, restrictions for inter-province travel are unnecessary and may lead to a divide between the country's citizens.

"The virus from Wuhan, China, has managed to permeate a nursing home in a small, rural Ontario community called Bobcaygeon and 15 seniors had died at last check. The virus is already here, what is a checkpoint going to do - other than create a make-work project for police, intimidate citizens and limit our travel freedoms across provincial borders? Also, don't the police have better things to do, considering many forces are already short staffed because of the virus. I think the divide will eventually come between citizens and obvious government overreach using the virus as an excuse."

Ottawa is in Ontario & our door neighbour is Gatineau, across the water in Quebec. We're very interconnected. Many work on one side & live on the other etc.

Today for the first time, I'm hearing reports of police on bridges asking for essential travel notes. It's wild. #COVID19

According to both Colton and Stewart, an additional danger for Canadians during the COVID-19 pandemic may emerge not from a neighboring province, but from outside the country, through Roxham Road – a Royal Canadian Mounted Police checkpoint at the border between the US and Canada in rural Quebec. It was open from 2017 until 20 March of this year – more than two months beyond the date when Canada saw its own COVID-19 "patient zero". According to Justin Trudeau, the shutdown is temporary.

Leigh Stewart expressed pessimism over Trudeau's announcement regarding the Roxham Road closure, saying that independent reporters who have gone there "can't seem to verify that this is indeed happening".

"The government has been tight-lipped about Roxham Road up until this point in regards to who is entering. Unless you go there yourself, it’s hard to believe the number of economic migrants crossing into this country and we have not seen any numbers in regards to whether these people are still crossing into Canada or if they’ve tested positive", she said.

Jill Colton, in turn, told Sputnik in an email that she disagrees with the county's Public Safety Minister Bill Blair, who said that there’s "no evidence" to suggest that asylum seekers pose a higher health risk. Colton expressed doubts that the government has indeed blocked all human traffic at Roxham road:

"Canadians aren't allowed to go to Roxham Rd., so we just have to take the government's word. Keep in mind, Trudeau has been incredibly lax on curbing the disaster he created with these illegals. They've cost taxpayers a fortune, taken up valuable space in shelters, and compromised Canadians' safety for years now", Colton said.

Roxham Road became the gateway into Canada for thousands of illegal immigrants (whom the country's government and the mainstream media have been calling "irregular border crossers") four years ago following Justin Trudeau's controversial "Welcome to Canada" tweet, inviting "those fleeing persecution, terror & war" to the Great White North. Since then, a loophole in the "safe third country" agreement between Washington and Ottawa has allowed around 54,000 “irregular crossers” to enter Canada outside the official ports of entry, such as airports, and to stay on Canadian soil while their asylum claims are processed.