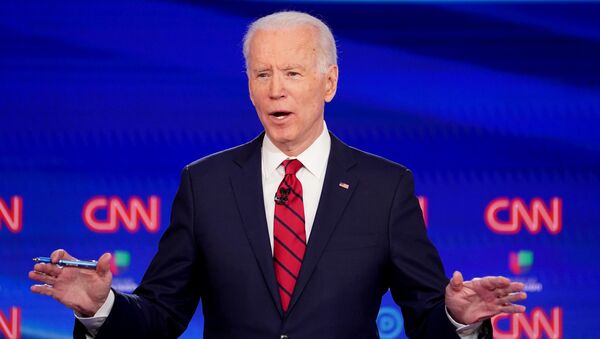 Tim Korso
All materialsWrite to the author
Earlier the US Democratic Party cancelled several rounds of primaries and postponed the party's convention to a later date over the spread of coronavirus in the country.

Joe Biden, the former US vice president and one of the two remaining Democratic presidential hopefuls left in the race, has insisted during an interview with ABC News that it is "necessary" to run a Democratic Convention despite the coronavirus outbreak and suggested that there is a way to do so without endangering its participants.

The Democratic frontrunner further clarified that how the convention would be organised depends on what measures are taken right now and in the future in regard to the outbreak. He also urged decision-makers to be guided by the recommendations of the experts when they make a call on how to handle the pandemic.

Biden's suggestion comes days after the Democratic Party announced that the convention, where the party's candidate for the 2020 presidential election will be selected, will be held on the week of 17 August instead of the previously planned 13 July. The decision was made due to the ongoing spread of the coronavirus infection across the country, as the CDC reported 304,826 people infected or with suspected COVID-19 infections and 7,616 deaths from the virus as of 5 April.

Joe Biden currently leads in the number of pledged delegates won so far in the primaries, with his only remaining rival, Vermont Senator Bernie Sanders, behind by 303 delegates. However, several rounds of democratic primaries have been postponed due to the outbreak and will be held at a later date, giving the senator a chance to reduce the gap with Biden.