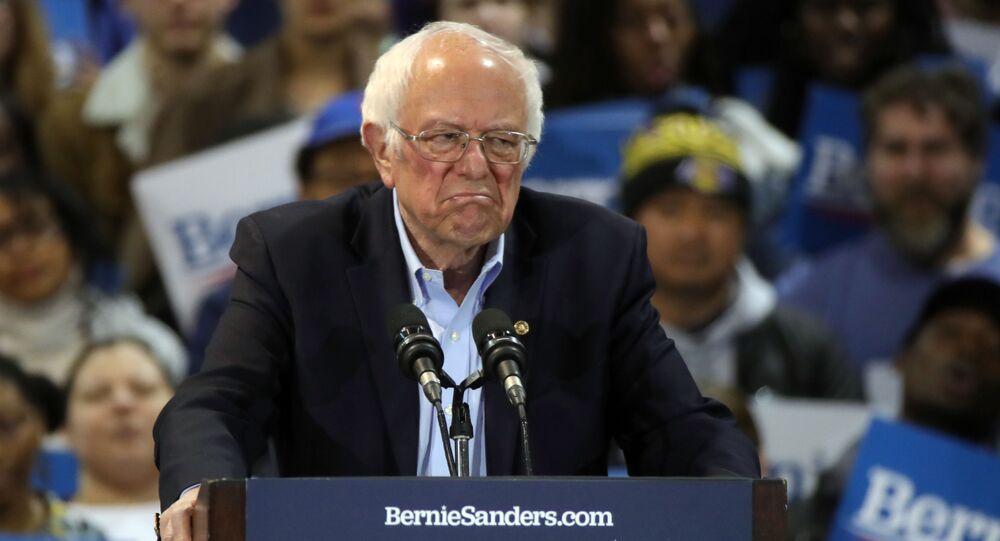 The preliminary results of the Super Tuesday primaries, which allocate 1/3 of all pledged delegates for the Democratic Party Convention, show Joe Biden winning in most of the states. This is his second major success in the Democratic primaries after performing poorly in the first three votes.

The initial results of Super Tuesday’s Democratic primaries have not been received well by supporters of Bernie Sanders, who were quick to cry "foul" as former Vice President Joe Biden revealed a surprising growth in support after showing poor results over the preceding two months.

Recalling the WikiLeaks revelations, as well as various conspiracy theories from back in 2016, Bernie Sanders’ supporters rushed to Twitter to complain that the Democratic Party establishment had allegedly once again gone to great lengths to prevent the progressive Vermont senator from winning the nomination, accompanying their publications with the #RiggedPrimary hashtag.

Some of his supporters blamed Sanders' ideological competitor, Senator Elizabeth Warren, for aiding the DNC's alleged attempts to deprive the Vermont senator of the nomination, arguing that she should have suspended her campaign and endorsed Sanders a long time ago.

Elizabeth warren took away 100’000’s of progressive votes from Bernie for just staying in with no chance what so ever .. resulting in a big wins for Biden .. don’t tell me the system is not against Bernie #RiggedPrimary #SuperTuesdayResults

However, Sanders' supporters, also known as Bernie Bros, faced criticism from their fellow Democratic voters, who accused them of pointless whining over the Super Tuesday "loss". Namely, they argued that the "rigged primary" was in fact just people voting for candidates that they actually like.

People who think it's a #RiggedPrimary are beyond reason. It's not rigged, it's called voting. That means convincing folk you're the best choice. When they choose the other person, u didn't do your job. Just like u want your vote "earned" so does everyone else. Stop whining.

The voters rigged the primary by voting for their preferred candidates. #RiggedPrimary

Some netizens noted that Sanders was the only person responsible for his underperformance on Super Tuesday, although others argued that his combative supporters were actually to blame.

Bernie supporters don’t want to admit that Bernie had a bad night because the youth didn’t show up at the polls and democrats felt alienated by his divisive language. So out with the #RiggedPrimary excuses 🤡

I can't honestly say that #RiggedPrimary is baseless, because yes, the DNC has made a concerted effort to keep Bernie from winning, However...#BernieBros also have themselves to blame by being assholes to anyone who wasn't one of them all year, even to Allies like Tulsi & Yang. pic.twitter.com/TT0GxAGCtl

Did the establishment rally behind Joe Biden to consolidate the moderate vote? Yes. Does that mean this is a #RiggedPrimary? No. It means we have more work to do to inform voters about how progressive policies will transform their lives and this country for the better.

Several Twitterians went as far as to compare Bernie Bros with Trump supporters, citing their alleged aggressiveness. Others added that the "rigged primary" allegations only benefit Trump, with Democrats having desperately been seeking to expel him from the White House since his election several years ago.

Bernie Bros don't realize THEY cost Bernie votes.
They act just like Trump's base.
We've had enough of that rat shit in our peanut butter
This was not a #RiggedPrimary.

All this #RiggedPrimary shit does is help Trump. The right is trying to get Bernie voters so convinced he's getting "robbed" that they'll stay home in November if he's not the nom. Who does that help? Not any cause Bernie cares about. Not the left. Not the country. Just Trump.

Senator Sanders didn't call it a #RiggedPrimary -Trump did.

Because Trump is a stupid corrupt racist incompetent reality tv star who can't stop lying, he must aggravate the division in the democratic base as deeply as possible

This hashtag plays into that.

The discussions about a "rigged primary" and attacks from Bernie Bros haven’t gone without wild "Russian meddling" conspiracy theories, with some suggesting that the whole ruckus was orchestrated by the Kremlin.

Don't fall for the Russian propaganda hashtag #RiggedPrimary. It was created by Russian bots & Trump supporters to make Democrats question the DNC and election integrity.

The GOP will do anything to win, and that includes working with Russia on stupid hashtags.

Only a Russian Bot or a sociopath would call it a #RiggedPrimary pic.twitter.com/2ZJDurZZ0o

Oddly enough, some netizens were unhappy with both of the two frontrunner candidates in the Democratic primaries, noting that the two have major downsides as possible nominees.

An old hippie commie and a dementia patient walk into a bar...I mean a Convention. #RiggedPrimary pic.twitter.com/jeVcRZEpmp