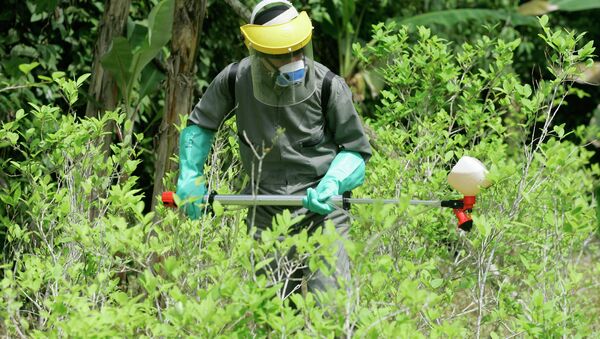 © AP Photo / Fernando Vergara
Subscribe
On Wednesday, Pentagon officials said that the US Navy, Coast Guard and other forces were “at war” with Latin American drug cartels, and announced that the country would be “launching enhanced counter-narcotics” operations in the Caribbean Sea and eastern Pacific Ocean to deal with the threat.

Venezuela rejects the Trump administration’s threats against Caracas, but can only welcome any US effort to finally take “action to protect its vulnerable and neglected borders from drugs originating from Colombian trafficking,” Foreign Minister Jorge Arreaza has said.

A government communique accompanying Arreaza’s tweet states that Caracas rejects the threats made by US officials, “who in a desperate attempt to divert attention away from the tragic humanitarian crisis that country is experiencing as a consequence of the erratic handling by its authorities of COVID-19, pretend to attack Venezuela with infamies and threats.”

#COMMUNIQUÉ | Venezuela rejects the infamies professed by Trump's security cabinet against the Bolivarian Government. However, but salutes that the US finally takes action to protect its vulnerable and neglected borders from drugs originating from Colombian trafficking pic.twitter.com/mrXpbkohIt

At the same time, the communique notes that “despite the aggressions and lies displayed against Venezuelan officials,” Caracas “salutes that for the first time in decades, the authorities of the United States are willing to take action to safeguard their borders, historically permeable, neglected and vulnerable to the thousands of tonnes of drugs that annually enter that country, originating in the drug trafficking industry that has developed in the territory of its ally and close partner, Colombia.”

The communique stresses that Venezuela is ready to “lend any necessary cooperation and coordination aimed at containing the advance of drug trafficking groups and organized crime in the region.”

US 'at War' With Latin American Drug Barons

Pentagon chief Mark Esper announced Wednesday that the US would be enhancing its “counter-narcotics operations” in the Caribbean and eastern Pacific. According to Esper, the response will include increased surveillance, disruption and seizures of drug shipments by US Southern Command, with the operations to involve Navy, Air Force and Coast Guard assets, as well as those of the Drug Enforcement Administration and other agencies.

Earlier, the AP reported that the US was deploying multiple Navy vessels to engage in counter-narcotics operations off Venezuela’s coast. The move comes a week after the Justice Department slapped ‘narco-terrorism’ charges against multiple members of the Venezuelan government, including President Nicolas Maduro, accusing them of engaging in drug-smuggling and offering millions of dollars in reward money for information leading to the officials’ arrest.

Maduro dismissed the charges, warning that if the US “imperialists and Colombian oligarchs” dared to “touch even a single hair” on officials’ heads, they would “face the Bolivarian fury of an entire nation that will wipe them all out.”

Observers have pointed to the hypocrisy of the DoJ charges, recalling that self-proclaimed ‘interim president’ Juan Guaido has an actual record of associating with members of the Los Rastrojos, a Colombian paramilitary group and drug cartel which at its height was one of that country’s most powerful drug traffickers.

If you want a Venezuelan leader associated with a muderous drug cartel, why here's Venezuela's most famous infomercial presenter @jguaido with Colombian drug lords Los Rastrojoshttps://t.co/9w7iwTrOGV

Maduro has flatly denied the charges against him and other officials, insisting his country has been “at the forefront” of the regional fight against drug cartels over the past 15 years.

The US helped exacerbate the long-running Venezuelan political crisis after anointing opposition leader Juan Guaido as the Latin American country’s ‘interim president’ in January 2019. Washington’s European and Latin American allies have joined the US in recognizing Guaido, but Russia, China, Cuba, Syria and other countries have rejected the politician’s claim to leadership. Recently, the European Union appears to have walked back its position, voicing support for Caracas request for $5 billion in assistance from the International Monetary Fund to help fight the COVID-19 pandemic.