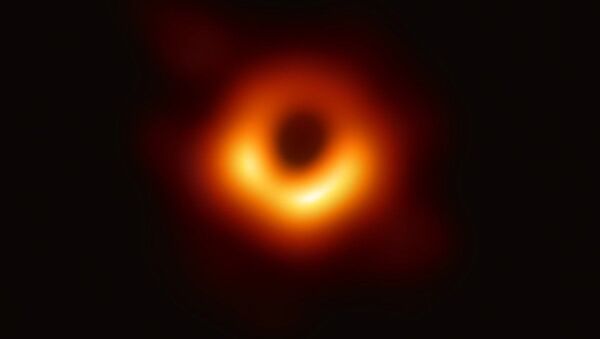 © Photo : Event Horizon Telescope collaboration et al.
Subscribe
As the rapid spread of the coronavirus has quickly become a global pandemic, it has led to social disruption on a worldwide scale, resulting in the closure of shops, airlines, sporting events and other social venues.

The worldwide network of telescopes, which last spring published the first-ever image of a black hole, has canceled its annual observations of the cosmos due to the coronavirus pandemic, it was announced in a statement on Tuesday.

This cooperation, collectively known as Event Horizon Telescope (EHT), announced that its 2020 project would be canceled due to the shutting down of the individual telescopes that make up the network.

The closures come as part of the global response to the outbreak of Covid-19.

"Progress on the scientific goals of the EHT Collaboration is secondary to the health and well-being of our collaboration members, our families, our institutions, and the people who work at the observatory and correlator facilities that support our efforts," representatives of the collaboration said.

Due to annual weather patterns and "celestial mechanics," the network is only able to make observations in March and April. As the pandemic and its social impact are expected to only get worse, the EHT team does not believe they will be able to be up and running by April.

The closures do not mean the end to the search, however, as the network announced that they would be focusing on "a rich trove of data" from 2017 and 2018 observations and devoting their full concentration to the "completion of scientific publications".

Observations are scheduled to resume in the spring of 2021, when the network plans to include a total of 11 facilities in its search across the globe.