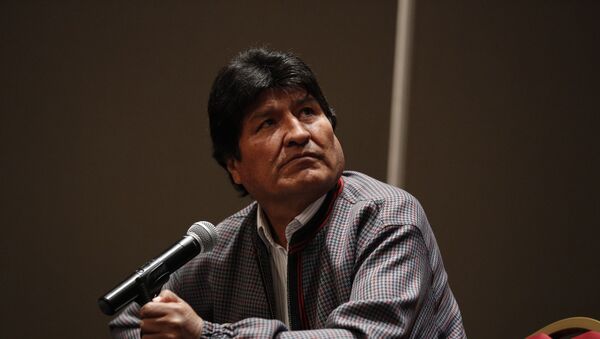 © AP Photo / Rebecca Blackwell
Subscribe
Ekaterina Blinova
All materialsWrite to the author
The latest statistical analyses say that the Organisation of American States' conclusions about the alleged fraud in Bolivia’s October vote don't hold water. Ex-UN official Alfred de Zayas has explained what steps could be taken by international and regional bodies in the aftermath of the exposure and shed light on the US role in the Bolivian coup.

On 10 March, the Centre for Economic and Policy Research (CEPR) released a major new study shedding light on flaws in the "final report" of the Organisation of American States (OAS) audit of Bolivia’s October elections. CEPR's research followed the publication by Jack Williams and John Curiel from the Massachusetts Institute of Technology (MIT) on the same matter.

According to CEPR, its new analysis responded to the OAS's criticism over neglecting alleged "flawed ballot tally sheets" and the presence of "hidden servers" used in processing vote results in Bolivia. The researchers assert that they provided a "comprehensive rebuttal" to the OAS’s Final Report by finding no evidence that the aforementioned irregularities had "altered the outcome of the election, or were part of an actual attempt to do so".

The OAS's conclusions were that former President Evo Morales and his Movement Towards Socialism (MAS) defrauded Bolivian voters last October and triggered nationwide social turmoil and violence which resulted in the ouster of the head of the government in November 2019. One might ask as to how the situation will further unfold given the emerging outrage over the OAS's flawed record.

Retired UN Independent Expert on the Promotion of a Democratic and Equitable International Order Alfred-Maurice de Zayas believes that the circumstances surrounding the "illegal coup" in Bolivia deserve special scrutiny and bemoans the relative silence on the part of the UN despite the latest revelations by MIT and CEPR.

Sputnik: What's your take on the CEPR and MIT studies revealing that OAS's analytical report on Bolivia's October elections was deeply flawed and Evo Morales won the polls fairly?

Alfred de Zayas: The Washington Post reported on the remarkable findings by the CEPR and MIT studies. Such revelations should have had political consequences, i.e. the recognition that Morales had won the election and that the coup entailed numerous violations of the OAS Charter by the United States with the complicity of some members of the so-called “Grupo de Lima”. Reparations under international law would require a return to the status quo ante – i.e. the reinstatement of Morales as the legitimate president of Bolivia.

But we live in a world not only of “fake news”, but in a world of “real news without consequences”. The so-called “international community” somehow accepts that there has been a gross violation of the OAS democratic Charter and that the OAS itself was involved in it. [This is] a scandal of the first order, a corruption of terminology, a revolt against international law.

This would have required, for instance, the resignation of OAS Secretary-General Luis Almagro. But we do not read in the pages of The New York Times or The Washington Post that there should be consequences for the illegal coup. There is a certain complicity of the media and of many governments that essentially welcomed the coup, even if they do not go public on it. Qui tacet consentire videtur ("Silence implies consent"). The relative silence of UN Secretary-General Antonio Guterres and of the UN High Commissioner for Human Rights, Michelle Bachelet, is also regrettable. 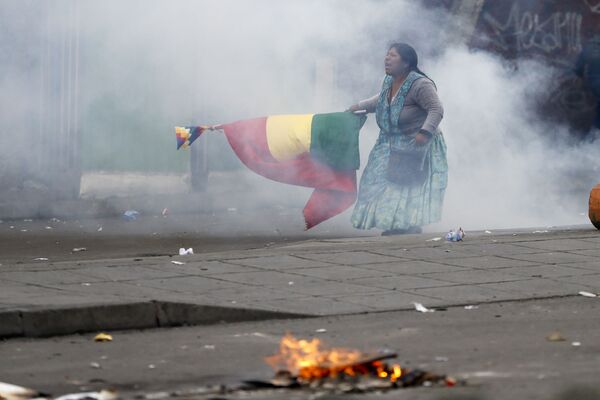 Sputnik: Could the CEPR/MIT statistical reports be used to initiate an international inquiry into the OAS's role in Bolivia's October turmoil that resulted in regime change? What international and/or Latin American bodies could hypothetically conduct such a probe?

Alfred de Zayas: This is the very minimum that should be expected. The UN Human Rights Council, the UN General Assembly, the UN Human Rights Committee could call for such investigations and appoint an independent commission of inquiry. Regionally CELAC, the Community of Latin American and Caribbean States, could carry out such an investigation. The Caribbean Community (CARICOM) should also get more involved.

The candidates met with local union leaders here, to secure their support ahead of the elections. pic.twitter.com/QBqy6Hm87F

​Sputnik: Given that the OAS is partially funded by the US, what role did Washington play in the Bolivian coup in your opinion? Can we draw parallels between the regime change in Bolivia and the January 2019 coup attempt in Venezuela?

Alfred de Zayas: The OAS was never an independent organisation, nor was it interested in promoting democracy or “people power”. The purpose of the OAS was and is to advance the political and economic agenda of the United States. On occasion there has been a more or less neutral OAS Secretary-General, but most of them have been puppets, like the current SG Luis Almagro. Back in 2009, the then-Secretary General of the OAS, José Miguel Insulza, strongly condemned the right-wing coup d’état against the government of President José Manuel Zelaya.

At that time the US was directly involved in the coup but the OAS was not directly complicit. The situation is different today, as we know how the OAS contributed to make the coup against Bolivia “palatable” to the public by wrongly accusing Morales of fraudulent election practices. Former OAS SG Insulza has joined Mexico and Argentina in condemning the coup against Morales, but the mainstream press hardly gives such “news” any importance.

Alfred de Zayas: USAID is notorious for is activities as the CIA’s “prettier face”, an agency that aggressively promotes US interests by financing opposition movements, bribing officials and other undemocratic activities, so that the will of the peoples of Latin America is subordinated to US priorities and the interests of the so-called “elites” in countries like Colombia, Honduras, and now Bolivia. As Bolivia's former President Evo Morales stated, the enhanced US assistance to the coup's interim government of Jeanine Anez gives further evidence of Washington's involvement in the coup: "The US wants us to be their backyard again", Morales tweeted. Why? Bolivia is rich in natural resources, particularly lithium, and the hour of the great looting may be at hand.

It is amazing how little the US tries to hide its intentions. By issuing a memo determining that “the provision of United States assistance to Bolivia in the Fiscal Year 2020 is vital to the national interests of the United States”, President Trump is essentially saying, “vital” to the US economy, to the US extracting industry, to US transnationals and to US investors. USAID arrival in Bolivia to help “monitor” the May 2020 elections means nothing less than the US intends to manipulate them in favour of the impostor Jeanine Anez.

New poll: Bolivia's MAS is just 4% away from a first round election victory. Pro-coup candidates not even close. pic.twitter.com/dJkDyjBL2f

​Global Research has uncovered so much hanky-panky that it is amazing that the media puts up with the farce that USAID actually provides aid and not political subversion: "For many years the Santa Cruz Civic Committee and its proto-fascist Youth Union received funding from the US National Endowment for Democracy (NED). According to analyst Eva Golinger some years ago, USAID provided $84 million to Bolivian opposition groups", [the report said]. Because of USAID’s interference in Bolivia’s internal affairs, Morales kicked them out in 2013. Now they are back.

As an American citizen I also demand that all US taxpayers be informed on CIA and USAID activities and about the misuse of our tax dollars for the purpose of subverting democratic governments abroad. But, of course, neither Donald Trump nor Joseph Biden will pay any attention to such demands.

000000
Popular comments
The Organisation of American States should be banned along with the OPCW which have shown their both corrupt organizations who produce political results. OAS was exposed in Bolivia and OPCW was exposed in Douma.