Putin & Erdogan’s New Agreement on Ceasefire in Syria's Idlib: What is Known So Far in 5 Points 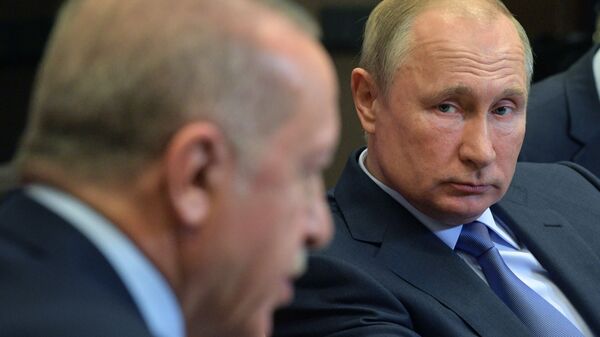 © Sputnik / Alexey Druzhinin
/
Go to the mediabank
Subscribe
International
India
Africa
Turkish President Recep Tayyip Erdogan has come to Moscow on Thursday to hold talks with his Russian counterpart Vladimir Putin over recent escalations in Syria’s Idlib province. The tensions in the area have recently led to the deaths of over 30 Turkish soldiers, prompting Ankara to target Syrian troops in response.

Russian President Vladimir Putin and his Turkish counterpart Recep Tayyip Erdogan announced after six hours of bilateral talks on 5 March that they have negotiated a preliminary agreement to resolve the ongoing conflict in northwestern Syria. Here is the list of main points which the two major regional players have agreed upon:

According to the Russian military, the Turkish troops were not supposed to be present in the area fired upon by Syrian forces. Russian President Vladimir Putin also later said that nobody, including the Syrian army, knew about the Turkish troops' whereabouts.