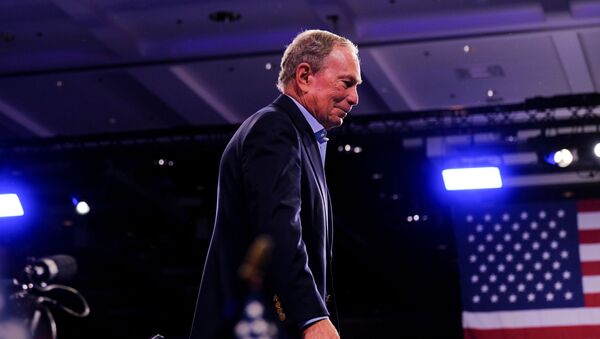 © REUTERS / MARIA ALEJANDRA CARDONA
Subscribe
Super Tuesday was not very successful for New York-based billionaire and former Mayor Mike Bloomberg, as he managed to win only one primary, in American Samoa, despite pouring hundreds of millions of dollars into his campaign.

Three months ago, I entered the race to defeat Donald Trump. Today, I'm leaving for the same reason. Defeating Trump starts with uniting behind the candidate with the best shot to do it. It's clear that is my friend and a great American, @JoeBiden. pic.twitter.com/cNJDIQHS75

​The news comes following the preliminary results of the Super Tuesday primaries, in which Bloomberg managed to secure only around 44 delegates in fourteen states and one US territory.

Bloomberg spent Tuesday campaigning in Florida, which will hold its primary on 17 March, where he indicated his desire to continue the race, despite his rough start. The former mayor also said during a rally that the "winning in November starts with Florida".

Bloomberg entered the presidential race in November 2019 and invested around $500 million in his campaign. He missed the first four contests for the Democratic nomination, aiming instead for delegate-rich Super Tuesday states. The strategy did not prove to be particularly successful, the results have shown, as he secured only one victory – in the tiny six-delegate territory of American Samoa. 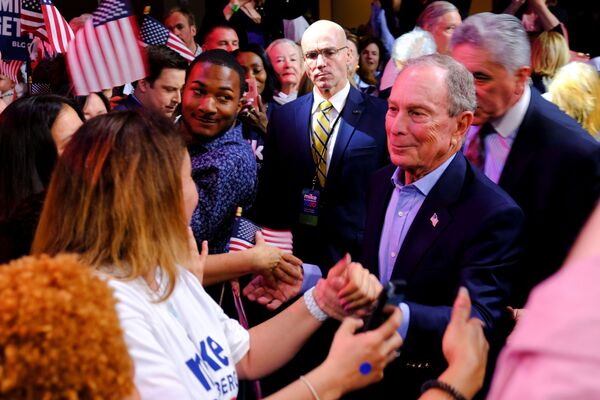 Joe Biden, in turn, won in at least 10 states, gaining the support of around 450 pledged delegates, closely followed by Bernie Sanders who emerged as the winner in California, the delegate-richest state.

As Elizabeth Warren also managed to secure the support of only a few dozen pledged delegates in the Super Tuesday primaries, it now looks like the main fight for the Democratic Party nomination will be between Bernie Sanders and Joe Biden. So far, the latter has been endorsed by not only Bloomberg, but also by two other dropouts – Amy Klobuchar and Pete Buttigieg.

What to Remember About Bloomberg's Presidential Bid

Following his late-entry strategy and large personal investments in his campaign, Bloomberg was repeatedly accused of attempting to "buy" the Democratic presidential nomination.

'Mini Mike' is my Fan! Donald Trump Ecstatic as Bloomberg Caught Praising Him in Old Interviews
During his bid to win the nomination, he was subjected to repeated attacks from Massachusetts Senator Elizabeth Warren, who accused him of poor treatment of women and racist policies during his time as mayor. Warren also compared Bloomberg with incumbent US President Donald Trump, despite the battle of words between the two billionaires.

Trump has repeatedly mocked Bloomberg for his height, dubbing him "Mini Mike", and has also criticised him for his supposed participation in the media crusade against the president.

"Mini Mike Bloomberg just “quit” the race for President. I could have told him long ago that he didn’t have what it takes, and he would have saved himself a billion dollars, the real cost. Now he will pour money into Sleepy Joe’s campaign, hoping to save face. It won’t work!", Trump tweeted following the development.

Mini Mike, “Three months ago I entered the race for President to defeat Donald Trump, (and I failed miserably!).