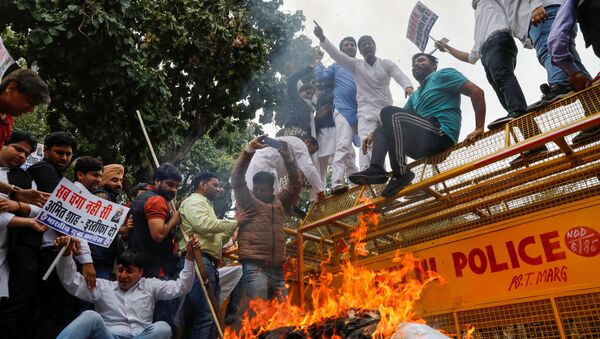 © REUTERS / ANUSHREE FADNAVIS
Subscribe
New Delhi (Sputnik): Part of New Delhi witnessed widespread communal violence on 24 and 25 February. As many as 47 lives were lost, while over 300 were admitted to hospital with injuries or burns. According to official data, 79 houses, 52 shops, two schools, three factories and four religious centres were set ablaze.

The government of New Delhi announced compensation for people who lost family members, property, vehicles or businesses in the recent violence on 29 February. But days after the announcement, residents of the worst-affected areas in northeast Delhi are in the dark about when they will receive the money.

In northeastern Delhi’s Shiv Vihar district, which seems like a ghost town, people are still on edge days after the violence, with the smell of burnt tyres still in the air.

Tucked in far northeast district of Delhi, which houses 38,000 people per square km, people in Shiv Vihar have lost their livelihoods to violence and are still far from returning to their normal life.

A driver Bisambar Singh said his car was burnt in the violence when rioters attacked and set ablaze a parking lot in the area. “I am not left with any source of livelihood now. How will I earn money for my family?,” he asked.

​The Delhi government said that a compensation form would be circulated seeking details from riot victims so that timely payments could be made. The applications were also made available on mobile phones for people to lodge details of loss of property, vehicles, damage to the business and details of injury and death.

"Any citizen can submit the form in the North East district magistrate’s office physically, or through the app," Delhi chief Arvind Kejriwal had said.

Residents of the area, standing where all the shops in one lane were set ablaze using gas cylinders and petrol bombs, claimed the rioters had gathered in large numbers at Rajdhani Public School, which was opposite Bisambar Singh’s house.

Kaushal Kumar Sharma, another affected person, said people left after their shops were burnt and looted. They were not even here, leave aside the compensation, he said. “The burnt buildings should be razed as there is constant fear of them collapsing any time but nothing is being done,” he said while pointing at a balcony of a house which could collapse any time.

With no relief camps or government workers in sight, residents in Shiv Vihar wondered how they were going to get their lives back on track.

“They had planned all this. They were inside the school and throwing petrol bombs, they were firing from inside. A labourer was sleeping inside a shop when rioters cut his hands and burnt him. What was his mistake?” said Sonu Tyaagi, a shopkeeper.

The district magistrate of northeast Delhi claimed they have been receiving application for compensation from people. “There is no fixed number yet as they were with sub-divisional magistrates (SDMs) but we were conducting daily survey, providing relief and packaged food. Our SDMs are on ground informing people,” Mahesh Kumar at DM’s office said.

Communal violence erupted in Delhi's northeast district after clashes between anti and pro citizenship protesters. The new citizenship law grants Indian citizenship to persecuted minorities from Pakistan, Afghanistan and Bangladesh. Muslims in India claim the law is discriminatory on religious grounds and violate the secular credentials of Indian Constitution. The government has, however, strongly denied these allegations.