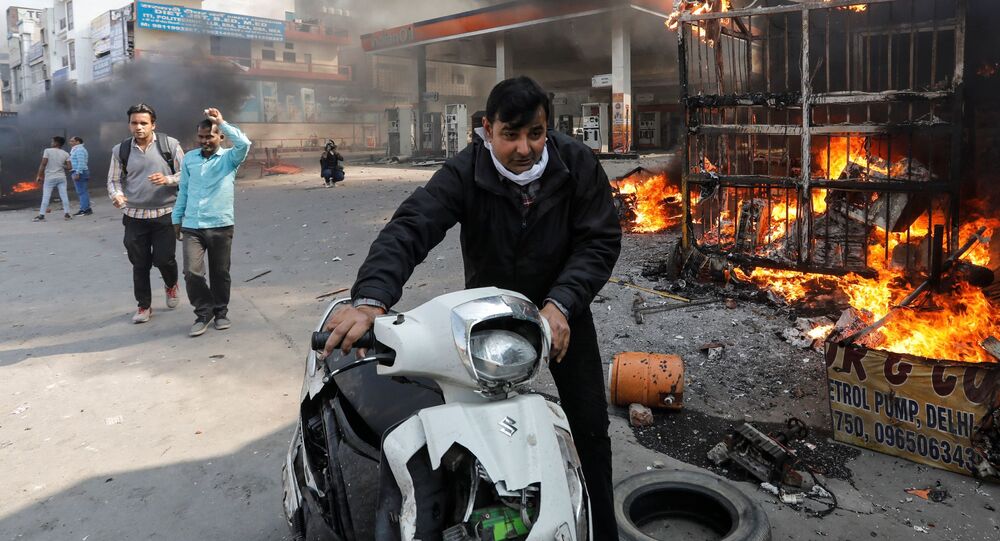 New Delhi (Sputnik): As Delhi picks up the pieces after four days of continuous violence, an eerie silence continues to grip the streets of the violence-hit areas. The city's Hindu-Muslim riots have left 42 people killed and at least 200 people injured, leaving behind streets filled with stones, charred property and abandoned vehicles.

Normality is slowly coming back on the streets of northeast Delhi, where Hindu-Muslim riots broke out over a controversial citizenship law.

Residents have been coming out into the streets to inspect the damage after five days of being trapped in their homes as paramilitary forces guard the streets of the capital.

The authorities have started the process of clearing up the debris on stone-covered streets while people are starting to rebuild fire-damaged houses.

But for some exasperated residents, it's all too little and too late to compensate for their loss.

Cleaning process underway after Delhi riots in Mustafabad. Roads remain largely deserted despite some coming out to stock food items after 4 days and offer prayers. pic.twitter.com/hCjSKBWYR1

​​Shops with limited stocks have reopened and vegetable hawkers are back on the streets in certain areas. Residents queued up to buy household items, and to stock up on medicines and food

The Cost of “Normalcy”

Delhi’s Yamuna Vihar area, surrounded by major violence-hit areas like Gokulpuri, Mustafabad and Kabir Nagar, remained largely calm during the rioter compared with neighbouring area, however, even here, rioters shot down laborer and injured another.

A resident of vijay park, Yamuna Vihar, recounts horror attack by rioters and how Mubarak was shot dead. pic.twitter.com/opMLHCnOtO

​Local residents say it was due to interfaith solidarity that they were able to guard their neighborhood but they have questioned the failure of the police and are angered by their alleged help for the rioters.

The residents of the area allege that police helped the rioters by lobbing tear gas shells on residents.

“A frenzied mob of hundreds, armed with guns, batons and swords entered in this alley along with police,” said Naim Ahmed, a resident of Yamuna Nagar.

He went on to describe the shooting of Mubarak, a 30-year-old migrant laborer from Bihar. He said: “The mob charged at us along with police, we threw stones on the mob keep away the rioters from entering the colony but the police lobbed tear gas shells towards us instead of towards the armed mob.”

According to Ahmed, the mob came with the police and vandalized property while firing on the crowd. Mubarak was killed while another resident Asif, sustained a bullet wound to the chest.

Mubarak, the sole breadwinner of the family, was on his lunch break when he was shot.

While his mother mourns the death of her son and the three days wait to retrieve his body, his father feels that these riots are more than just Hindu-Muslim violence and said they were the work of a “monster” fed by selfish forces.

Delhi has witnessed ongoing protests since the passage of controversial citizenship Amendment Act (CAA), which critics claim is discriminatory towards Muslims as it grants Indian citizenship to illegal non-Muslim immigrants from Bangladesh, Pakistan and Afghanistan.

Protests against the law, coupled with large scale violence, arson and vandalism has left 23 people dead and hundreds injured.

Some analysts say that the rhetoric of politicians during the Delhi Assembly 2020 elections inflamed the already volatile situation. One politician compared protesters to “rapists”, while another called them “terrorists and traitors”.

Delhi riots were flared up after supporters of law clashed with opponents of law on 22-23 February in northeast Delhi.

The local council of the riot-hit Mustaffabad, Mohammad Suleman Malik said the law seeks to single out Muslims but during the riots both communities displayed brotherhood with Muslims guarding the houses of Hindus and vice-versa.

“We would have died to save our Hindu brothers residing in this Muslim-majority area, this is the kind of feelings we have but expect the same in return from our government,” said Malik, who saw a nearby mosque being torched by rioters.