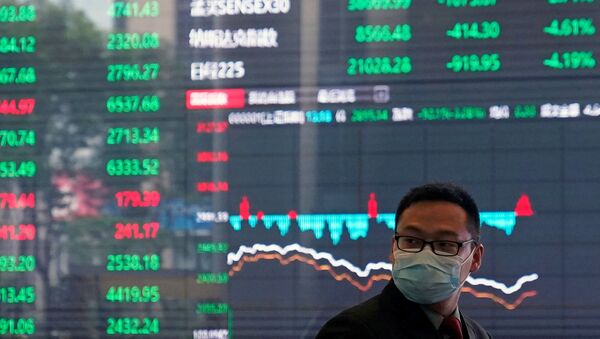 © REUTERS / Aly Song
Subscribe
WASHINGTON (Sputnik) - Earlier in the day, US stocks closed with their biggest weekly losses since the 2008 financial crisis, as Wall Street’s three major indexes each fell about 12 percent or more on the week, amid fears of a global economic slowdown from the coronavirus crisis.

"It is difficult to see how markets can stabilize - unlike 2008," Schirach, president of the Global Policy Institute and Chair of the International Relations Program at Bay Atlantic University (BAU), said on Friday.

According to an online tracker maintained by Johns Hopkins University (JHU), there are 63 confirmed coronavirus cases in the United States, including seven cases in which the people have recovered.

"Without some good news, such as new data showing a global contagion slowdown and/or the announcement of a cure or vaccine that could be quickly administered, it is difficult to see how markets can stabilize and go back to normal," he said.

After the 2008 financial crisis exploded, the panic was due to lack of knowledge but a massive liquidity injection by the Federal Reserve into the US economy, combined with massive rate cuts, helped to reassure the markets, Schirach recalled.

"After that, climbing back to normality was certainly painful; but everybody agreed that it was doable," he said.

However, in the current coronavirus crisis, there was no end game in sight, Schirach acknowledged.

"The health experts have no reassuring answers for this medical emergency. Lacking a cure, keeping infected areas isolated and slowing down or blocking altogether travel and events where large numbers of people congregate seems a sensible way to slow down or contain the spread of this virus," he said.

The problem was that these prevention measures cause enormous economic losses, Schirach noted.

"This coronavirus epidemic has created an enormous challenge for the global economy. As there are no medical remedies, beginning in China, the countermeasures have focused on lock-downs, quarantines and interruption of travel to countries or regions affected," he said.

The economic impact of these measures has already been devastating, Schirach said.

"Large parts of China are essentially closed down. This means that factories and offices are closed, workers do not work, goods are not produced [and] orders are not filled. Restaurants and hotels are empty, airlines cannot fly," he said.

This prolonged work stoppage will amount to catastrophic economic losses for China, whose economy was already anemic prior to this crisis, in part due to the negative impact of the tariffs war with the United States, Schirach commented.

"The reality of globalization means that we already have widespread economic contagion, even in almost unaffected countries. While relatively unscathed by the epidemic (at least so far) the United States is already suffering economically," he said.

"The different structure of the global economy today made it far more vulnerable to such shock disruptions. If China freezes, US companies do not get their products and/or do not get critical parts and components for products assembled in the US. This is costly," he said.

Certain business sectors like leisure travel, business travel, hotels and airlines were already suffering in a major way due to all the restrictions imposed by the authorities, Schirach observed.

"The US oil industry will suffer devastating losses. With production down in Asia, oil demand collapsed and so did prices. The shale oil industry supports many companies and tens of thousands of high paying jobs in the US. Many of these jobs are now in jeopardy," he said.

The fact that new points of contagion have exploded in South Korea, Japan, Italy and Iran was truly scary, Schirach continued.

"The problem is that we do not know how long this epidemic will last. And this allows for the worst scenarios to proliferate. Should the epidemic spread from Italy to the rest of Europe, and from Europe to other parts of the world, the economic damage would be incalculable," he said.

Earlier in the day, a California health official confirmed the second case of community transmission coronavirus wherein the origin of the virus is unknown.

The total number of confirmed cases of coronavirus worldwide has reached beyond 84,500 with 79,251 in China alone, according to authorities.