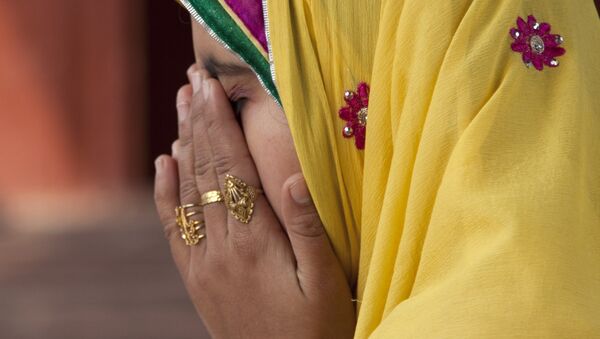 © AP Photo / Tsering Topgyal
Subscribe
According to the Gothenburg Mosque, a woman must please her husband sexually and is not allowed to leave home without his permission.

The giant Gothenburg Mosque, which was erected in 2011 with financial help from Saudi Arabia, has landed in hot water with its website section for “new Muslims”.

Among other things, the guide that includes detailed instructions on how to live like a devout Muslim, says that it is sinful for a woman to reject “legitimate intimacy”. The “rights of a married man” suppose that the woman has an obligation to show “responsiveness to his sexual needs”. Nor it is permitted for a woman to leave home without her husband's permission, “be it a general or a personal matter”.

“A Muslim woman should be responsive to her husband's sexual needs and it is recommended to be nice to him. If she rejects his legitimate sexual intimacy, she commits a sin unless there is any valid reason, such as being on her period, keeping a mandatory fast for a guilt from before, or being sick”, the mosque said with a reference to the Quran.

​Tweet: “Woman must not deny husband sex, or leave home without permission. How Gothenburg's largest mosque guides life as a good Muslim”.

Its values, however, sparked a negative reaction from the Swedish public. The advice there doesn't only express a “reprehensible view of women”, but is also contrary to the law, Sweden's leading terrorism expert Magnus Ranstorp of the National Defence College wrote in an opinion piece. Ranstorp stressed that is not the first time a problematic view of women has been discovered in Swedish mosques.

“The aforementioned mosque is the largest in Gothenburg. This means that a mosque with great legitimacy in society links to a website with extremely controversial views. It is very serious. This case also raises a question on whether and how foreign funding for mosques implies a potential transfer of values from Saudi Arabia and other Gulf states to Sweden that are inconsistent with our basic values. These Gulf states often exert direct influence on mosques through financial grants to non-profit foundations that, in turn, determine the religious orientation of religious communities”, Ranstorp warned.

“It shouldn't be like this. But the feminists and the left have fought for this. So here you go”, a user wrote.

​“This is the reason why I as a Muslim don't go to the mosque at all in Sweden, will you all wake up now? People take extremism and culture from their home country and all Sweden does is talk about freedom of religion, how is this freedom?” another tweeted.

At times the debate took a more humorous angle.

“Can a wife deny her wife sex? Asking for my wife”, a lady tweeted.

“The site has good information for new Muslims, but interpretations that we don't share happen to occur. It is good that you pay attention to it, then we will get back and correct this”, El Alti said.

Iraqi Head of Swedish Mosque Jailed for 8 Years for Torturing Family, Beating Kids With Kebab Skewer
Despite the half-hearted condemnation, the link to the "New Muslim Guide" was not removed.

The number of Muslims in Sweden has skyrocketed in recent decades, exceeding 800,000 and amounting to 8.1 percent of the population today, according to the Pew Research Centre. This has sparked a hot debate on the place and the role of Islam in Swedish society.