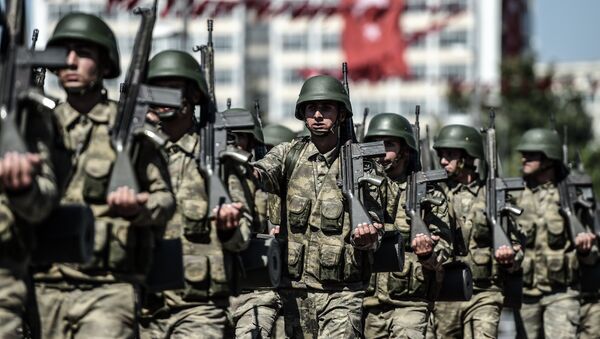 © AFP 2021 / OZAN KOSE
Subscribe
Ekaterina Blinova
All materialsWrite to the author
The Syrian government forces and its allies are capable of retaking Idlib and restoring the control of Damascus over the province, but at a cost, says US military veteran and security analyst Mark Sleboda foreseeing a frozen conflict scenario, and explaining how a Libyan conflict can become a bargaining chip in talks with Turkey.

Having amassed a considerable military force in Idlib, Ankara has threatened to kick off an operation in the region by the end of February if Damascus does not halt its offensive and withdraw behind the Turkish military positions.
"An operation in Idlib is imminent," Turkish President Recep Tayyip Erdogan told his party fellows at the 19 February gathering. "We are counting down; we are making our final warnings".
For quite a while, the Syrian government forces have been wiping out terrorist elements in the region, something that the Turks should have done under the September 2018 Sochi agreement.

Current Balance of Forces in Idlib

"The Syrian government does have enough military force in the long term to retake Idlib with the help of its allies – Russia and Iran", says Mark Sleboda, a US military veteran and international affairs and security analyst. "However, it may take several years to complete this task. Idlib is over 90 per cent controlled – and this includes surrounding areas of Latakia province – by Hayat Tahrir al-Sham*".
Describing the balance of power in the Idlib province, Sleboda outlined that besides Hayat Tahrir al-Sham and jihadi groups subordinate to it – the Turkistan Islamic Party and Hurras al-Din, dubbed by the analyst "Al-Qaeda squared". "Between these three groups, there are at least 50,000 jihadists under arms right there".

Besides these forces, there is a large contingent brought by Turkey, called the National Liberation Front (Jabhat al-Wataniya Lil-Tahrir) and the Syrian National Army (SNA) to uphold the Idlib province against the Syrian government. These two formations are comprised of remnants of various jihadi groups operating since 2011 on the ground and amounting to between 50,000 and 80,000 armed militants, the US veteran highlighted. He added that they are based mostly in the area of the Jarabulus corridor and Afrin, that is under direct military occupation by Turkish troops.

"On top of that the Turkish military has sent some 9,500 troops and some 1,500 military vehicles including tanks, artillery, howitzers, armoured personnel carriers to Idlib", Sleboda points out. "So right now, altogether there is a force of probably 100,000 militants in Idlib resisting the advance of the Syrian Army".

Though Damascus and its allies can retake this area, it would be a hard fight, and it may take a long time to accomplish this, and it will come at a high cost, the security analyst summarised.

Meanwhile, the Syrian government has accomplished one of its main objectives which is to secure the 450-kilometres long M5 highway that crosses the country from north to south, from Aleppo to Damascus and on the border with Jordan.

According to Sleboda, the second important step would be to secure the M4 highway that runs off the M5 in Idlib and goes to the coastal province of Latakia that is almost completely under Damascus' control except for some areas.

He highlights that under the Sochi agreement struck by Russia and Turkey in September 2018, the M4 and M5 should have been opened to civilian traffic and the heavy arms should have been eliminated from terrorists operating in the area. However, these objectives have not been reached to date. 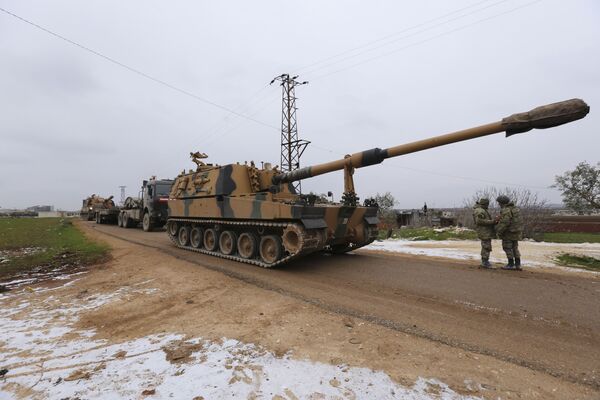 Libyan and Syrian Conflicts are Intertwined

The Turco-Syrian conflict over Idlib and Ankara's involvement in war-torn Libya on the side of the Government of National Accord (GNA) are to some extent intertwined, according to the US military veteran.

"Obviously, there is a connection between the two conflicts", says Sleboda. "In the very beginning of the conflict, militants and arms were being sent by Turkey from Idlib to Syria, and now basically the reverse flow is happening: Turkey is sending some of its proxy forces to fight for its interests in Libya, in defence of the Muslim Brotherhood*-affiliated regime in Tripoli".

According to the US veteran, Ankara faces specific difficulties on the ground in Libya since the only country that supports the Tripoli-based government apart from Turkey is Qatar. He specified that the GNA currently controls only Tripoli and Misrata surrounded by the Libyan National Army (LNA) led by Field Marshall Khalifa Haftar.

In contrast, Haftar is supported by Russia, Saudi Arabia, the United Arab Emirates (UAE), Egypt, France, and possibly even Italy, which had previously thrown its weight behind Tripoli.

"Turkey's interests in both conflicts have to do not only with strict definitions of national interests but also with ideology", the analyst remarks.

Having said that Sleboda presumes, that the Libya card could be used by Russia to persuade Turkey to make concessions with regards to Syria and, specifically, Idlib. 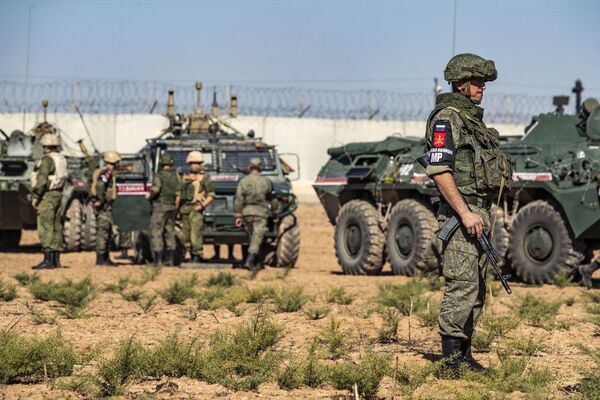 'Frozen Conflict in Idlib is the Most Likely Scenario'

Although Russia and Turkey have important economic relations with Ankara and are more interested in them than Russia, the Erdogan government has certain geopolitical ambitions which are linked by many to neo-Ottoman geopolitical ideology, Sleboda emphasises.

"In this case, Turkey's geopolitical ambitions in Syria, Iraq and elsewhere come into contradiction with its continued good economic relations with Russia", he stresses. "Turkey has obviously not lived up to the terms of the Sochi agreement. Russia has been incredibly patient towards Turkey, but it has started to draw a bit of a harder tone as Erdogan's rhetoric against Russia and the Syrian government forces in Idlib becomes harder and harder".

Sleboda foresees that Russo-Turkish relations will continue to worsen but they "will be trying to avoid a direct military conflict".

"I believe that a new frozen conflict is probably the most likely result in Idlib. Turkey will use its military forces and its proxies to create a new line of control in Idlib, which will be more heavily enforced and seek to prevent Syrian government and Russian advances further", he suggests.

He highlights that if the Turks are wise, they will not seek to target the M4 highway which is certainly the Syrian Arab Army and Russia's next point of liberation, which is very important for Syria's economy and national security.

In this possible frozen conflict scenario there will be increased incidents of Turkish forces attacking Syrian government troops with artillery, he predicted, stressing that both the Turks and the Russians will avoid directly engaging with each other on the ground in the province.

"There is a strong possibility that Turkey will agree with al-Qaeda [affiliates] that they publicly disband and put on a 'proxy uniform' so that Turkey can claim that there are no longer any extremists in Idlib", he presumes, adding that hardcore jihadi groups such as Jaish al-Islam already did so.