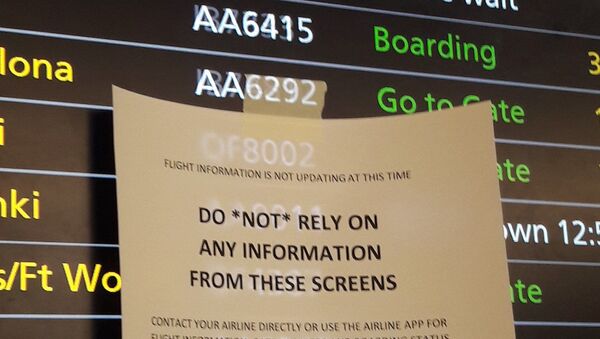 Tens of thousands on Sunday saw mass flight delays and cancellations, as numerous airlines were hit by a reported technical glitch in one of the world's busiest air hubs.

Many who reportedly waited up to 10 hours for their gate opening, took to social media to complain about disrupted journeys, sharing images, according to some posts, of the "pandemonium" at Heathrow airport.

IT in London Heathrow down. All screens black and no one has a a idea on which gates the flights are
🙈🙈 pic.twitter.com/5ZwX8duirg

@British_Airways Terminal 5 at Heathrow is in pandemonium. No announcements, screens not functioning, luggage system broken. How about using Twitter or other comma channels to tell people what’s going on?

​A reason behind the total telecommunications outage of the Heathrow system reportedly remains unknown. The Heathrow airport tweeted regarding what they referred to as "technical issues" and apologized for the inconvenience, while vowing to fix the problems.

We are experiencing technical issues at the airport which we are working hard to resolve. To help direct customers to their gates, we have deployed additional Heathrow colleagues across our terminals. We apologise for the disruption and will continue to provide regular updates.

The major failure also prompted disruptions with baggage as hundreds of travelers were stranded in planes or in the terminal waiting for luggage that never came. Check-in systems were inaccessible for airport staffers and passengers. Thousands of disgruntled travelers missed flights amid Sunday's Heathrow airport chaos.