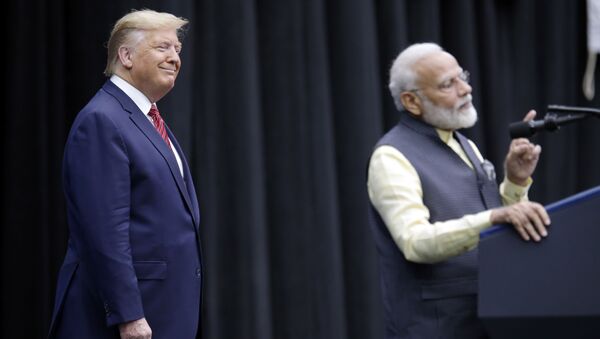 New Delhi (Sputnik): US President Donald Trump and First Lady Melania Trump are set to visit India on 24 and 25 February with several bilateral issues, including the contentious trade deal, on agenda. During the two-day visit Trump would be given a grand public reception in Prime Minister Narendra Modi’s home state of Gujarat.

Ahead of US President Donald Trump’s visit to India on 24-25 February, several US lawmakers have written to Secretary of State Michael Pompeo to assess the situation in Kashmir and whether minorities in India were at risk of expulsion due to the Citizenship Amendment Act and National Register of Citizens.

New Delhi had imposed several restrictions in Jammu and Kashmir, following the abrogation of Article 370, which stripped the erstwhile state of its special status and led to hundreds of political leaders and activists being detained. While many of them were later released, three former Chiefs of Jammu and Kashmir still remain in custody even six months after of their detention, and all three have since been incarcerated under a harsh Public Security Act.

Focusing on the internet shutdown in the valley and political figures that had been detained due to the revocation of Article 370, the lawmakers have demanded assessment of the number of individuals incarcerated by the Indian government for political purposes, including an assessment whether detainees endure torture or other forms of mistreatment.

US lawmakers write to US Secretary of State Mike Pompeo to assess the situation in #Kashmir ahead of #Trump's visit to #India pic.twitter.com/SU9dyvIKSZ

Other areas of assessment include restrictions on communication in Jammu and Kashmir, including access to the internet and cellular telephone services; and the level of access to Jammu and Kashmir that the Indian government grants to independent observers, foreign diplomats and consular agents, foreign journalists, international organisations and representatives of non-government organisations.

The lawmakers have also demanded an evaluation of restrictions on religious freedom in Jammu and Kashmir.

The country-wide protests against the Citizenship Amendment Act (CAA) and National Register of Citizens (NRC) have also been taken into account by the US lawmakers.

The lawmakers have demanded that a number of individuals — including people from a number of religious, ethnic and other minorities — are at risk of statelessness, the arbitrary deprivation or denial of nationality, expulsion or arbitrary detention pursuant to the Government of India's latest National Register of Citizens list, and any excessive use of force by Indian authorities against demonstrators opposing the CAA.

The CAA seeks to grant citizenship rights to illegal immigrants from several religious minorities from three neighbouring predominantly Islamic countries – Afghanistan, Bangladesh, and Pakistan — who arrived in India before 2015.

Enactment of the CAA triggered large-scale protests across the country and took the lives of 25 people in three regions. The protests continue unabated as its opponents believe the law green-lit a form of religious discrimination and contradicts the secular character of the Indian Constitution, though the federal government has denied these charges.

Meanwhile, the controversial NRC requires a headcount to identify bona fide citizens of the country and illegal immigrants. Muslims consider both CAA and NRC to be attempts to discriminate against their community.