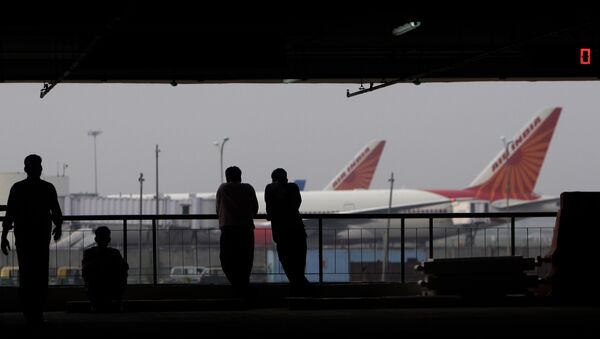 New Delhi (Sputnik): Following the confiscation of the currency attempted to be illegally taken out of India, a security official revealed that this is a unique and peculiar modus-operandi for the concealment of foreign currency. The concealed amount was in Saudi Riyals, Qatari Riyals, Kuwaiti Dinars, Omani Riyals, and Euros.

India’s Central Industrial Security Force (CISF), which looks after security at metros and airports, nabbed a man on Tuesday evening who was set to fly to Dubai from Delhi Airport while hiding foreign currencies, a security official said on Wednesday. The amount the man had on him was worth $63,137.

Security officials deployed at Delhi's Indira Gandhi International Airport on Tuesday observed suspicious activities by a passenger, identified as Murad Ali, in the check-in area of the airport's Terminal 3 area.

Ali was bound for Dubai on Air India flight No AI-995, the official said.

“On physical checking of his baggage, a high volume of foreign currencies was found concealed in cooked mutton pieces, peanuts, biscuit packets and other eatable items kept inside his baggage", said a senior CISF officer.

A video of the incident has been shared by the security official.

In the video, several different currencies can be seen being taken out from different edible items by security officials.

Ever eaten peanuts worth Rs 45 lakh? 😂

Well done @CISFHQrs
A man was flying to Dubai from @DelhiAirport concealing foreign currencies in peanuts, biscuits, achar and what not.

Caution: Such ultra innovative ideas may lead to arrest. pic.twitter.com/ZB6E50IxkR

The man has been handed over to Customs Officials for further action in the matter.