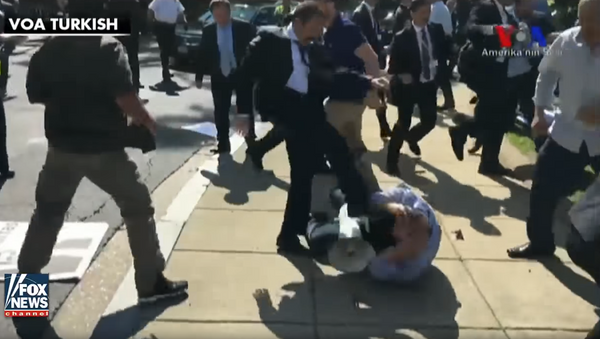 A US court has denied Turkey’s request to have the federal judiciary throw out a civil suit filed by protesters seeking damages in relation to the 2017 assault of Kurdish protesters while Turkish President Recep Tayyip Erdogan was visiting Washington, DC.

US District Judge Colleen Kollar-Kotelly on Thursday struck down Ankara’s argument that security officials accused of assaulting Kurdish protesters in DC’s Sheridan Circle in 2017 were protected under the Foreign Sovereign Immunities Act, as protesters were posing an immediate threat to the Turkish president.

“Defendant Turkey points to no indication that an attack by the protesters was imminent,” the judge wrote in her ruling, as reported by The Hill. “Instead, the Turkish security forces chased and violently physically attacked the protesters, many of whom had fallen to the ground and no longer posed a threat.”

Kollar-Kotelly said that video footage of the incident that she observed showed “the protestors were merely standing on the Sheridan Circle sidewalk” and were not a threat to Erdogan.

It’s unclear what specific footage Kollar-Kotelly viewed, as several clips were captured of the scene, such as this one from Ruptly which was recorded as the conflict was already underway.

Erdogan had spent the day meeting with US President Donald Trump and other American officials on May 16, 2017, when the violent altercation occurred. Prior to the clash, individuals, many of them of Kurdish and Yazidi descent, were peacefully demonstrating at Sheridan Circle, which is located near the Turkish embassy residence.

Two of Erdogan’s bodyguards were taken into custody following the incident but were ultimately set free, as “customary international law affords heads of state and members of their entourage with inviolability from arrest and detention," noted a State Department official at the time.

The judge’s Thursday denial of Turkey’s claim comes in relation to two separate cases involving over a dozen plaintiffs who say they were assaulted during the 2017 incident and are seeking to hold Ankara accountable on civil charges.

“We look forward to proving our claims in Court and to getting a just result for our clients who were attacked and badly injured while protesting against human rights abuses,” said Agnieszka Fryszman, an attorney for the plaintiffs, reported The Hill. “I am glad the Court agreed that agents of a foreign country should not be able to claim immunity for their violent attack on free speech in the United States.”